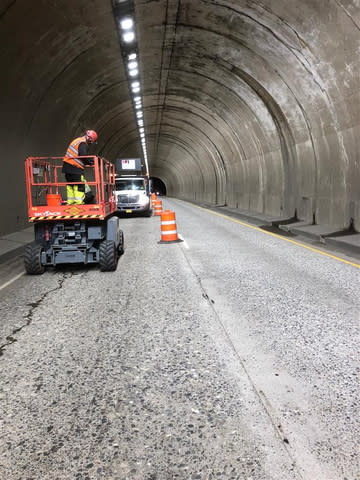 The $18.6 million project replaced more than 8,000 streetlights in the Portland metro area with energy-efficient LEDs

The Oregon Department of Transportation has partnered with clean technology integrator, Ameresco, on an $18.6 million project to replace more than 8,000 high-pressure sodium light fixtures in the greater Portland area with LEDs, including 13 tunnels in the ODOT 1 region. (Photo: Business Wire)

The new LED streetlights are dark sky compatible with a color temperature of 3,000-4,000 Kelvin, use 50% less energy than traditional highway and tunnel lights, and will reduce carbon emissions by approximately 3,500 metric tons per year. Improved streetlights line highways in Region 1 of the ODOT system, which includes Clackamas, Hood River, Multnomah counties, Eastern Washington and the Metro interstate bridges.

“From the start, we were thrilled to partner with Ameresco on a street lighting project that would reduce long-term maintenance costs and reinforce our commitment to reducing carbon emissions through renewable solutions. couldn’t foresee every challenge, but thanks to Ameresco, we successfully overcame obstacles as they arose and the project was delivered seamlessly and smoothly,” said Elizabeth Papadopoulos, Project Manager consultant, ODOT.

Ameresco worked in conjunction with ODOT to develop a plan that minimizes traffic and public safety issues while adhering to design standards led by ODOT. The Ameresco team also worked in coordination with the main freight stakeholder on the project, the Mobility Advisor Committee, to complete the streetlight conversion project within the construction time frame.

“Working with the Oregon Department of Transportation on this project has been extremely rewarding as the solutions implemented are sustainable and will provide benefits to commuters for years to come,” said Britta MacIntosh, senior vice president of Ameresco. “The LED lamps we’ve used come with lower color temperatures, which means they won’t need replacing for at least 15 to 20 years, a much longer life than the cycle traditional two to four year life of high pressure lamps.

Construction began in May 2020 and officially completed in December 2021.

To learn more about the energy efficiency solutions offered by Ameresco, visit www.ameresco.com/energy-efficiency/.

Founded in 2000, Ameresco, Inc. (NYSE: AMRC) is a leading clean technology integrator and developer, owner and operator of renewable energy assets. Our comprehensive portfolio includes energy efficiency, infrastructure upgrades, asset sustainability and renewable energy solutions delivered to customers across North America and the UK. Ameresco’s sustainability services in support of customers’ pursuit of Net Zero include upgrades to a facility’s energy infrastructure and the development, construction and operation of distributed energy resources. Ameresco has successfully completed energy-saving and environmentally friendly projects with federal, state and local governments, healthcare and educational institutions, housing authorities, and commercial and industrial customers. Headquartered in Framingham, MA, Ameresco has over 1,000 employees providing local expertise in the United States, Canada and the United Kingdom. For more information, visit www.ameresco.com.

About the Oregon Department of Transportation

The Oregon Department of Transportation provides a safe and reliable multimodal transportation system that connects people and helps Oregon’s communities and economy thrive.

Announcement of the completion of a client’s project contract is not necessarily indicative of the timing or amount of revenue from that contract, overall company revenue for a particular period, or backlog trends. total company projects. This project has been included in our previously reported contractual backlog as of September 30, 2021.