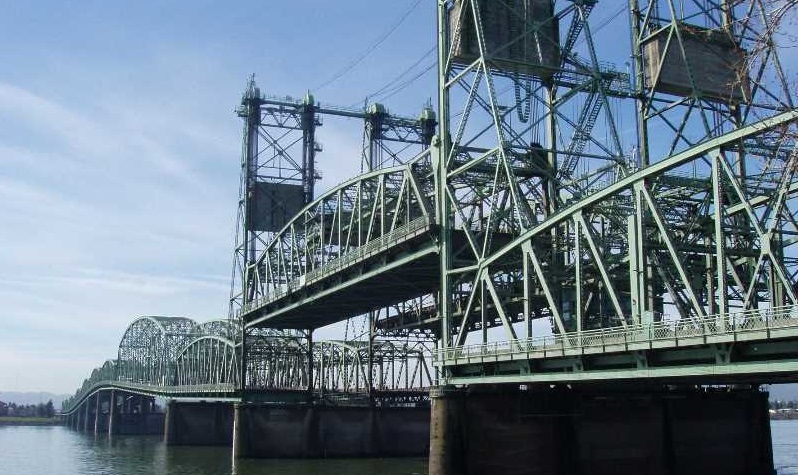 PORTLAND, OR (Portland Grandstand) – As transportation officials in Oregon and Washington plan to replace the aging Interstate 5 bridge over the Columbia River, critics and regional leaders are demanding a project that will help Oregon achieve its goals of reduction of carbon emissions.

the Interstate Bridge Replacement Program aims to replace the current span from Portland to Vancouver, Washington, with a modern, earthquake-resistant structure that will reduce congestion and increase capacity for public transit and cycling. The current bridge over the Columbia River is over 100 years old and rests on old wooden piles underwater, making it susceptible to collapse or heavy damage in an earthquake.

Oregon and Washington have agreed to share the cost of the project.

If this all sounds familiar, that’s because it is.

The Interstate Bridge Replacement Program is a revamped version of the unsuccessful 2004 Columbia River Crossing project, which focused on the same bridge and offered the same solutions and funding mechanisms. A 2019 Oregon Secretary of State audit called the project a “failure” with valuable lessons offered.

The CRC effort died in 2014, after Oregon approved spending $450 million on the project, but failed to get the same buy-in from Washington state. “As a result, after nine years of planning and millions of dollars spent, the CRC project was halted in 2014 without any construction,” the audit said.

The new concept bridge would include auxiliary lanes to facilitate entering and exiting the freeway, improving traffic flow. The bridge is also expected to have a variable rate toll, but that cost has yet to be decided. Construction is expected to take six to seven years and could begin in 2025.

While upgrading or replacing the bridge is almost inevitable, Oregon leaders say it’s time to get it right.

On January 6, the Metro Council voted to approve $36 million committed by the Oregon Department of Transportation for preliminary engineering of the bridge project. Councilors warned that full membership depends on meeting Metro and the Bi-State Legislative Committee goals of advancing racial equity, building resilience and economic prosperity, and reducing gas emissions to greenhouse effect.

“We know that we are going to have to make compromises and that no compromise is perfect, but what is important here is that we respect our values ​​of limiting pollution and protecting the environment, while at the same time keeping our economy moving and improving the livability of our region,” Metro said. Council Speaker Lynn Peterson said Jan. 24 during a bistate legislative committee meeting on the bridge. Metro is the regional government that oversees land use and infrastructure in the urban counties of Multnomah, Clackamas, and Washington.

Climate goals under the microscope

On the eve of the Metro Council’s Jan. 6 vote, about two dozen climate activists gathered in the rain in Apotheker Plaza outside Metro’s Portland office with signs and a megaphone. The group called for a bridge project that emphasizes transit, cycling and walking, saying current plans to add auxiliary lanes will only put more cars on the freeway and threaten Oregon’s carbon reduction goals.

Lawmakers in Oregon and Washington, along with bridge project planners, are weighing whether a new bridge should include light rail, a rapid transit bus system, or a bus that runs along the shoulder.

The bridge project’s own manager is unsure whether a new bridge can achieve this goal.

“Are we going to reduce the production of greenhouse gases? I’m not sure, but we’re going to do our best to make it happen,” Greg Johnson, project manager for the Interstate Bridge Replacement Program, told Metro advisers.

In a follow-up interview, Johnson said easing traffic flows on I-5 during rush hour will reduce the number of idling cars, which, in turn, will reduce vehicle emissions. He notes that the vehicles operate inefficiently at low speeds and at high speeds. Reducing traffic congestion, encouraging mass transit and replacing a significant number of gas-powered vehicles with electric vehicles over the next decade should help reduce emissions, Johnson said.

“We’re creating a multi-modal corridor that will provide significantly improved choices for people who want to get out of these single occupancy vehicle journeys and use public transit or walk across the bike via this form,” Johnson said. “Look at the congestion that exists now, seven to 10 hours of congestion. If we don’t address some of the causes of congestion, it will increase in the future. »

Johnson said the bridge must support current and future traffic loads. It must also offer better access to public transport and travel without a vehicle. Commuters rely on the bridge to get to and from work. Freight trucks also use the road to transport goods.

“We cannot build a bridge that is small and recreates the conditions that currently exist,” Johnson added.

Dozens of ODOT bridges are in poor condition. here is the list

He later said that project leaders were “committed to reducing (greenhouse gas) emissions in line with the goals of our national and local partner agencies”, when asked again if a bridge could both increase capacity and reduce emissions.

Although there are no federal requirements to address greenhouse gas emissions, project leaders say they are committed to doing so.

The main argument against expanding highway capacity is a concept called “induced demand”. The theory goes: anything that increases capacity will make people drive more and end up recreating the same problems that currently exist, says Chris Smith of the climate advocacy group. More highways.

“All proposed alternatives for the IBR include 10 lanes. Whether or not we call these ‘auxiliary lanes’ (they’re longer than the entire I-405 freeway) doesn’t matter,” Smith wrote to the Metro Council in November. “The project refers to these pathways creating ‘a more efficient bridge.’ It is this very efficiency that will drive more single-passenger vehicle trips, which will increase greenhouse gas emissions. We must prevent this.

Transportation has been at the center of climate justice protests in Portland, mostly organized by teenagers. Young activists called on agencies like the Oregon Department of Transportation to stop investing in fossil fuel infrastructure altogether.

Ukiah Halloran-Steiner, 16, is a high school student from Yamhill County and an organizer with Sunrise Rural Oregon — an extension of the national youth-led Sunrise movement to stop climate change. Halloran-Steiner said teens and young adults are pushing for bold action because younger generations will be most affected by decisions made today.

“This (bridge replacement) project, in particular, could be detrimental to my future, and their plans indicate that the project could be an extension of the lanes,” Halloran-Steiner said. “I think this is one of those freeway expansions that’s going to take a lot of money from places like investing in more public transit in downtown Portland and better public transit in communities. rural.”

There’s still time to do it right

The contribution of climate groups has not gone unnoticed. Two days before Metro’s meeting on Jan. 6, the council wrote an open letter to the public saying that the money that would have to be approved by Metro for the bridge would help study the project and ensure it is brought to life. scale appropriately.

The Portland Grandstand is media partner of KOIN 6 News

“We cannot get the answers we need about this project’s ability to meet our values ​​and expectations without the work funded by the (Metropolitan Transportation Improvement Program) amendment,” the letter said. Metro.

The council’s 5-1 vote to approve funds for the project came with reluctance.

Councilor Mary Nolan urged the bridge project team to come up with a bridge design that moves more people out of cars and onto public transport.

“I’m asking if you’re committed to including in the options … things that significantly change the multimodal split,” Nolan told Johnson, flatly. “I’m asking if basically everything we did today touched you.”

Nolan was the only dissenting vote.

Councilman Juan Carlos Gonzales said he believed it was possible to design a bridge that was consistent with Metro’s goals and values.