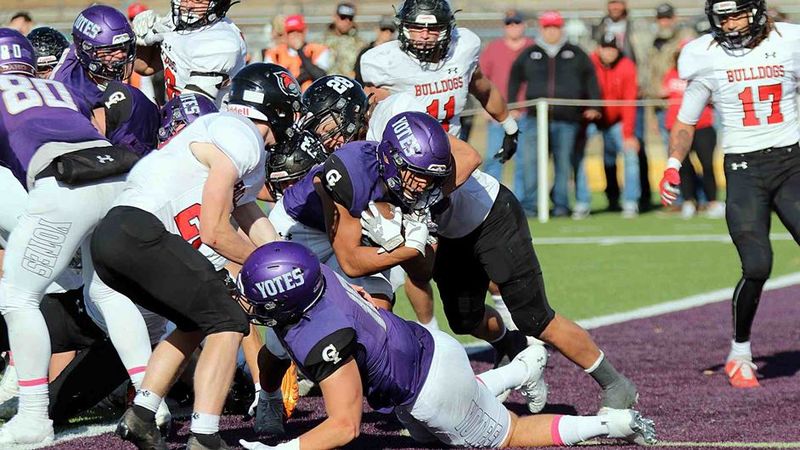 CALDWELL, Idaho – Allamar Alexander ran two yards for the winning touchdown in second overtime, taking the College of Idaho to a wild 48-42 victory over No.22-ranked Montana Western at Simplot Stadium.

Western (5-3, 4-3), who forced overtime with a last-second touchdown at the end of regulation time, scored three goals and struck out his second overtime possession and John Mears missed a field goal of 40 yards. The Yotes responded, like Caden Cobb pulled off an 11-yard run, with a 12-yard run from Alexander setting up the winner of the outing.

Both quarters had monster days – like the Yotes Ryan hibbs went 30 for 35 for 299 yards and a touchdown, setting a new program record for percentage completion and completions. Jon Jund was equally impressive for Western, completing 23 of 30 passes for 276 yards and two touchdowns at Trey Mounts.

Each team scored on their first three possessions – with the game tied for 21-21 at the break.

C of I took the opening kickoff and went 75 yards in seven plays, with a 46-yard pass from Hibbs to Jean Kreps setting up a 6 yard Nick calzaretta touchdown stroke – one of three touchdowns for the senior.

The Dawgs responded with a 9-play practice, with a 9-yard pass from Jund-to-Mounts shooting Western to one point.

Calzaretta would score on the next two C of I drives – one set up by a 41-yard pass from Hibbs to All-America safety Taeson Hardin.

Jund added a short touchdown run and followed with a 14-game practice that was almost eight minutes behind, finding Mounts in the end zone again – with his 2-point conversion run tightening the scoring.

Western took their first lead of the afternoon early in the third quarter on a Colten McPhee touchdown. After stopping the Dawgs for the first time today, a Hunter Gilbert The punt return gave the Yotes excellent field possession and the next play, Kreps swept 40 yards for a touchdown to tie the game.

After a Bulldog punt, C of I regained the lead after a 9-play, 70-yard drive, with Hibbs connecting with the tight end. Connor gaga in the end zone at 6 meters.

C’s I was stopping Western on downs near midfield, but couldn’t get a first down – and after Yotes’ only punt of the day – the Dawgs led the field in under two minutes. In the 4th and 11th near midfield, Jund found Nate Simkins on a 56-yard pass to prepare for a Colten McPhee touchdown with 21 seconds left.

In the first overtime, Western only needed six games to score, as Neville pushed his way through from a yard. C of I blocked, as Gagain caught a deflected pass for 11 yards on 3rd and 6 and Alexander hit it 2 yards to force the second overtime.

Neville rushed 17 times for 65 yards and two scores, while Simkins caught 10 passes for 174 yards in the loss.

C de I hits the road next weekend, heading to southern Oregon for a 1 p.m. PT kick-off.