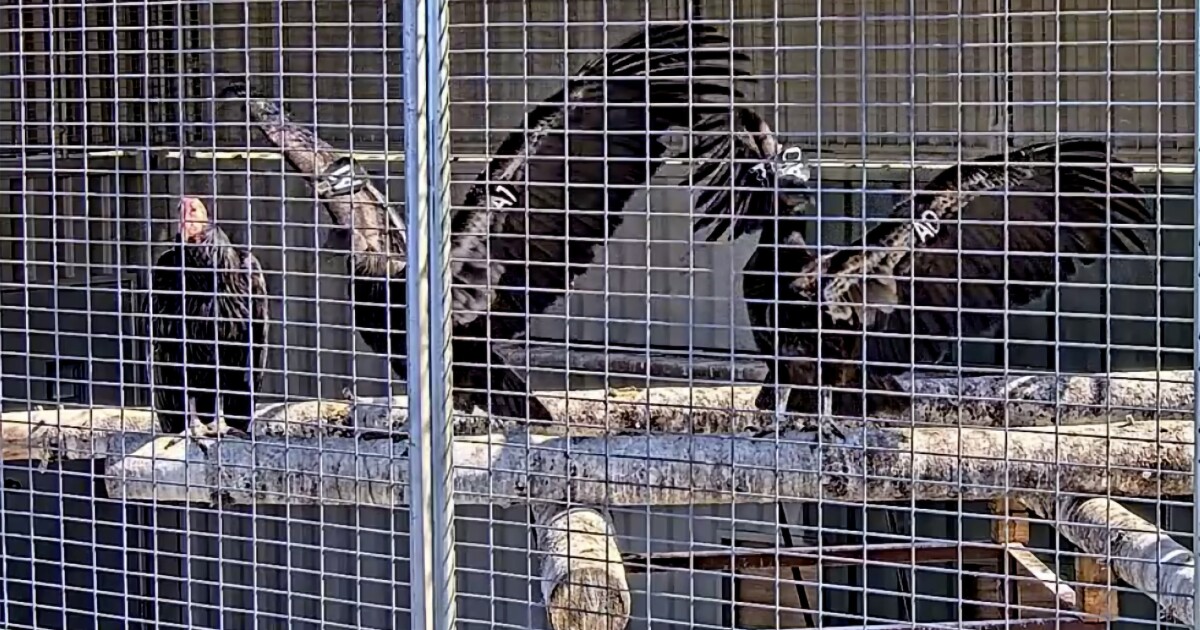 REDWOOD NATIONAL PARK, Calif. — The endangered Californian condor returned on Tuesday to soar above the state’s northern coastal redwood forests for the first time in more than a century.

Two captive-bred birds have been released from an enclosure in Redwood National Park, about an hour’s drive south of the Oregon border, as part of a project to restore giant vultures to their historic habitat in the Pacific Northwest.

The two male condors were moved to the staging area in the late morning and a remote controlled gate was opened. After a few minutes of carefully observing the opening, the birds climbed through the opening one by one, spread their giant wings and took off.

“They just jumped up and flew away,” Tiana Williams-Claussen, wildlife director for the area’s Yurok Tribe, said in a webcast.

Condors were last spotted in the park area around 1892, authorities said. The California condor is North America’s largest native bird, with a wingspan of nearly 10 feet (3 meters). The scavenger was once widespread but had all but disappeared by the 1970s due to poaching, lead poisoning from the consumption of animals shot by hunters, and habitat destruction.

The birds can live up to 60 years and fly great distances in search of carrion, so their range could span multiple states.

Federal and local fish and wildlife agencies are involved in the restoration project led by the Yurok tribe, which has traditionally considered the California condor a sacred animal and has worked for years to bring the species back to the land. ancestor of the tribe.

“For countless generations, the Yurok people have borne the sacred responsibility of maintaining balance in the natural world. The reintroduction of the Condor is a concrete manifestation of our cultural commitment to restoring and protecting the planet for future generations,” said Tribal Chairman Joseph L. James. said in a statement.

Two more condors were due to be released later – after biologists determined the two birds that took flight on Tuesday displayed appropriate behavior, authorities said.

The condors, including one female and three males, are between 2 and 4 years old. Two were hatched at the Oregon Zoo and two at the Peregrine Fund World Center for Birds of Prey in Idaho.

In the early 1980s, the 22 condors remaining in the wild were trapped and incorporated into a captive breeding program that began releasing the giant vultures into Los Padres National Forest in southern California. , in 1992.

This herd has expanded its range while other condors now occupy parts of the central coast of California, Arizona, Utah and Baja California, Mexico. The total population now numbers over 500 birds in captivity and in the wild.

Two years ago, California condors were spotted in Sequoia National Park in California’s Sierra Nevada for the first time in nearly 50 years.

However, that same year, a dozen adults and two chicks died when a wildfire ignited by an arsonist swept through their territory on the Big Sur coast.

Lawmakers in 19 states, including Oregon and Washington, want legal refuge for trans youth