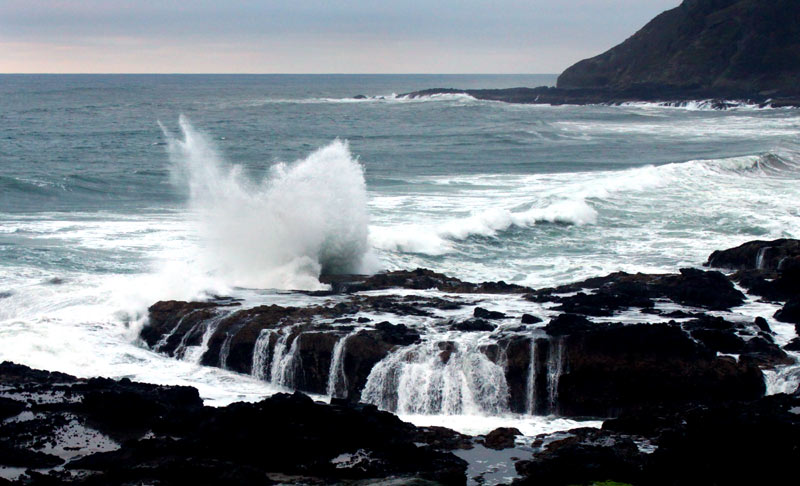 (Oregon Coast) – A windy, wet and somewhat dangerous day and a half is forecast for parts of the Oregon Coast and the Washington Coast on Sunday and Monday, with a severe wind warning in effect through Monday afternoon and a flood watch until Tuesday for some areas. To top it off, the National Weather Service (NWS) warns of chaotic waves around 18 to 22 feet, creating some pretty dangerous situations.

High wind warnings and flood watches are in effect for the northern half of the Oregon Coast and the southern half of the Washington Coast, while areas north and south of these will not be not too affected. However, strong surf conditions are also expected on the southern Oregon coast, although there is no warning there.

The high wind warning for areas including Westport, Long Beach, Seaside, Pacific City, Lincoln City and Florence is in effect from 10 p.m. Sunday evening to 4 p.m. Monday. Look for sustained southerly winds of 25-35 mph gusting to 60 mph, possibly even stronger on the headlands around Cannon Beach, Newport, the Long Beach Peninsula or Cape Foulweather.

In other words, this is a fairly significant winter storm for the Oregon Coast and the Washington Coast.

“Excessive runoff can lead to flooding of rivers, streams, creeks and other low, flood-prone places,” the NWS said. “Right now, the greatest concern is with the Grays and Naselle rivers, which could reach flood stage late Monday evening or Tuesday morning.”

Offshore, the NWS said high winds and rough seas would combine to cause heavy swells ashore.

“The strong southerly winds will result in significant wind wave action, which will also be combined with a westerly bottom swell of approximately 6-8 feet,” the NWS said. “This pattern should push combined seas to near 20ft again tonight and Monday morning. Seas will begin to calm again later on Monday but will likely remain at or above 10 feet through Tuesday evening and possibly into Wednesday as well.

These dangers on the beach will grow a bit on land, the NWS said.

“A high tidal cycle coupled with swollen rivers may result in minor tidal overflow flooding along parts of the north coast on Monday and Tuesday,” the NWS said.