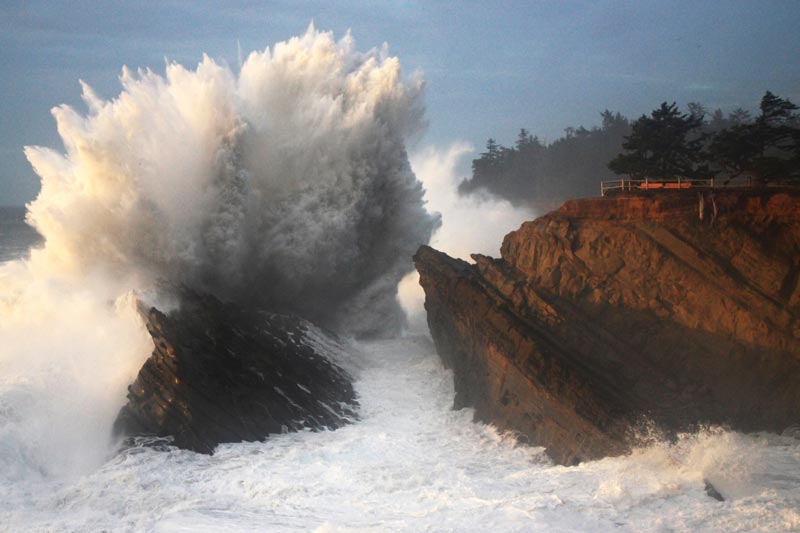 (Long Beach, Wash.) – From the northern edges of the Olympic Peninsula on the Washington coast to Brookings on the southern Oregon coast, a flurry of wintry weather and surf warnings is lighting up beaches across the Oregon and Washington. A series of high wind warnings or advisories just expired for many beaches Monday afternoon, with the exception of high wind advisories still in effect on Washington’s North Shore until late tonight. (Above photo: Shore Acres near Coos Bay, courtesy of Oregon‘s Adventure Coast)

High surf warnings are in effect for much of the Washington coast and much of the northern Oregon coast through Tuesday, bringing dangerous 15- to 38-foot breaking waves to areas like Westport, Long Beach, Seaside, Cannon Beach, Manzanita and Pacific City. However, areas north of Westport (like Forks) or those south of Lincoln City (Newport, Coos Bay, etc.) are subject to high surf advisories, multiple times Tuesday.

National Weather Service (NWS) offices in Medford, Portland and Seattle have issued the warnings and hazard statements, and are urging extreme caution on beaches until Tuesday afternoon.

For the central and northern Washington coast, gusts up to 55 mph are still possible later in the night. Earlier Monday and Sunday, much of the Oregon Coast and the Washington Coast experienced extremely windy weather. Places like Mount Hebo near Pacific City and Mount Hood saw peak gusts well over 70 mph. Cape Perpetua, Florence and Newport’s Yaquina Bay Bridge saw gusts in the 1960s.

High surf advisory on the North and Central Washington coast. The NWS said this is in effect until 5 p.m. Tuesday, with large breaking waves of up to 23ft expected in many areas. They urge the public to stay out of the water, and it will be very dangerous to hang out on smaller, rockier beaches (like those on the Olympic Peninsula).

Warning of high waves on the southern coast of Washington and on the northern coast of Oregon. This is in effect until 11 a.m. on Tuesday, but with gargantuan waves breaking at 34 feet sometimes possible. This will cause significant erosion and serious dangers to the beaches. The warning covers Westport, Long Beach, Seaside, Cannon Beach, Rockaway Beach, Pacific City and all areas in between.

“The highest waves will occur after dark, making it especially difficult to see rapidly changing conditions and moving debris on beaches,” the NWS said. “Incoming swells come from near the west.”

Destructive waves will crash over piers and other structures: Oregon officials can’t stress enough the urgency to stay clear of these structures or most beaches. Severe erosion is expected, and strong waves could actually hit beachfront buildings, such as some low-lying hotels or rentals at Cannon Beach.

“Higher than normal runoff is expected on beaches and low-lying shorelines,” the NWS said. “Stay away from the big logs on the beach. Water flowing over the beach can lift or roll logs which can injure or kill anyone caught in their path.

High Surf Advisory Central Oregon Coast. Effective from Lincoln City through Florence, expiring at 11 a.m. Tuesday. Breakers of up to 28 feet are expected in many areas, making smaller beaches like Gleneden Beach, making parts of Lincoln City and Yachats an absolutely dangerous place to hang out. Circuit breakers like this could even cause logs and debris to rise above the D River access in Lincoln City.

Getting close to the rock ledges of Yachats or Depoe Bay will be an exceptionally dangerous thing to do.

“Stay away from the water’s edge and watch out for unusually high waves,” the NWS said.

High Council Southern Oregon Coast. This is in effect from 11 p.m. tonight until 5 p.m. Tuesday, bringing large breaking waves of up to 24 feet at times along the Curry, Coos and Douglas County coasts.

“Large breaking waves of 20 to 24 feet will create hazardous conditions along the southern Oregon coast tonight through Tuesday evening,” the NWS said. “Stay away from the surf area and piers. The beaches in the area can become dangerous due to dangerous surf conditions.

This unusual winter storm in the spring will produce excellent wave viewing in areas like Depoe Bay, Yachats, Cape Disappointment near Long Beach and Shore Acres near Coos Bay. Be sure to stay behind the barriers and stay away from the rock ledges themselves – but it is possible to view these spectacular sights from safety.