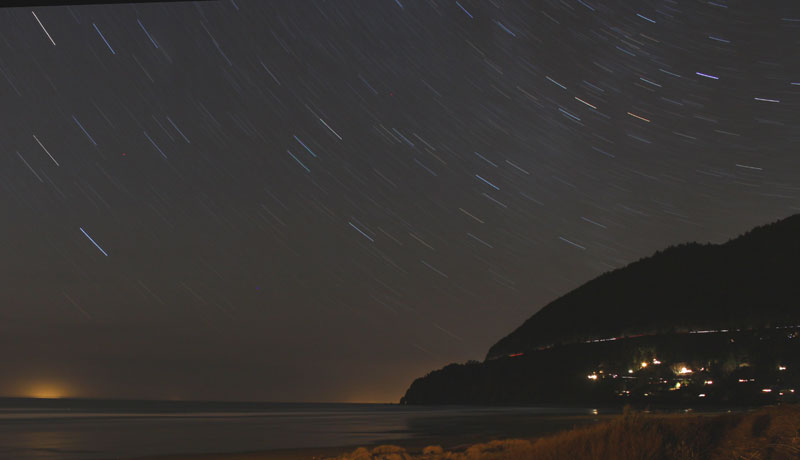 (Astoria, Oregon) – Summer is coming to an end on Northwestern beaches with interesting astronomical information and fun sites to explore. Among them: a harvest moon with a different color, good weather waiting behind the scenes, and maybe something strange shining at night. (Above: after dark in Manzanita)

The Oregon coast and the Washington coast will officially say goodbye to summer on September 22 at 12:21 p.m., as the fall equinox kicks off.

Jim Todd, an astronomy expert at OMSI in Portland, said this is happening across the northern hemisphere, a date that marks the time when the days really start to get shorter and the nights get longer. There is a significant difference in the hours of day and night.

â€œThis is the time when the Sun’s rays are directly over the equator and the days and nights are almost of equal length,â€ Todd said. â€œThe sun’s rays continue to travel south, and therefore the hours of darkness will be longer than daylight. This is the reason why it is called â€œequinoxâ€, a Latin word meaning â€œequalâ€.

In a way, it centers around 45th latitude north – which passes right by Neskowin and Lincoln City.

â€œAt the 45th latitude north, the time it takes for the sun to fully rise and set, which is several minutes, is added to the day and subtracted from the night, and therefore the day of the equinox lasts a little. more than 12 hours. Todd said. “Another reason the day lasts more than 12 hours on an equinox is that the Earth’s atmosphere refracts sunlight.”

Harvest the moon over Newport, after it has moved above the horizon and is no longer orange

â€œFor example, the Chinese Mid-Autumn Festival, also known as the Moon Festival, is a harvest festival also celebrated in Vietnam, Taiwan and Hong Kong,â€ he said. â€œLocally, modern Harvest Moon festivals with a variety of concerts, farmer’s markets, beer and wine tastings, and craft fairs. The wonderful changing fall color of the trees in the Pacific Northwest is expected for the remainder of September and through October of this year. This is a perfect opportunity to align the sundial as the sun rises in the east and sets in the west on the equinox.

For the Oregon and Washington coasts, this season brings the â€œsecond summer,â€ where the weather is typically the best of the year. Due to a particular set of weather circumstances, you’ll have less winds, warmer temperatures, and bluer skies – but not all the time, of course. This weekend, the largest storm system is expected to hit the Pacific Northwest in months.

Other special aspects: When the warmer temperatures return to the beaches, look around darker beaches for the phenomenon of “glowing sand”, which is caused by bioluminescent phtyoplankton. Head to a beach with no light interference (and no moon helps), like those along Long Beach, southern Cannon Beach, Manzanita, Oceanside, Horsfall Beach in Coos Bay, some beaches in Lincoln City and really most of the beaches along the southern Oregon coast. Bioluminescent Phytoplankton: What Makes the Sand Glowing Glow on the Oregon Coast, Washington

â€œThis refers to the Full Moon closest to the first day of fall, which is Wednesday, September 22,â€ Todd said. “Depending on the year, the Harvest Moon may fall before or after the fall equinox which happens on or around September 22 or 23 each year.”

As if to represent fall, you will likely see a large orange moon for a while.

â€œThe orange color of a moon near the horizon is a real physical effect,â€ Todd said. â€œWhen we look towards the horizon, we are actually looking through a greater thickness of Earth’s atmosphere than when we are looking directly above us. The atmosphere diffuses blue light (the reason why the sky is blue). The thickness of the atmosphere in the direction of a horizon scatters blue light most efficiently, but it allows red light to pass through. Therefore, a moon near the horizon takes on a yellow, orange, or reddish tint.