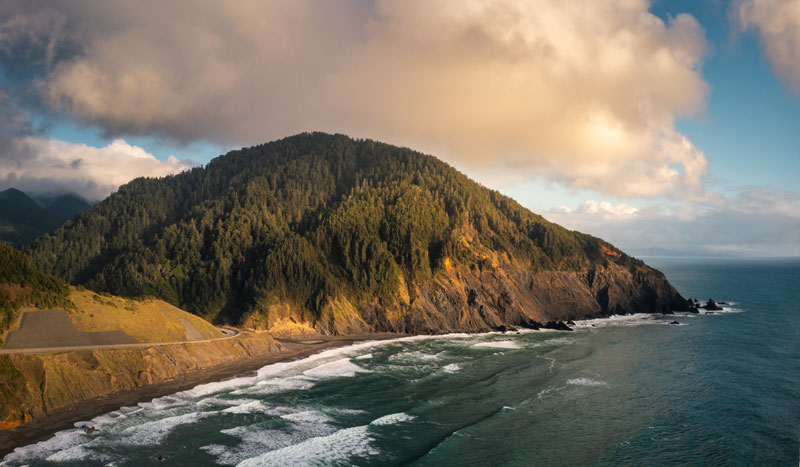 (Newport, Oregon) – A new angle of research into megathrust earthquakes along the Oregon and Washington coast has been opened as a group of scientists from Oregon State University (OSU) announce breakthroughs regarding the fluids that exist under the Pacific Ocean. This could play a role in more accurately predicting the effects of major earthquakes (and therefore tsunamis) that occur along this offshore region, such as the large one in 1700 and the massive still brewing. (Above: Humbug Mountain on the south coast – courtesy of Manuela Durson – see Manuela Durson Fine Arts for more)

The fluid – mostly seawater that has leaked lower – exists in a section near this region, but not in the deeper crust that lies beneath much of Oregon and Washington called Siletzia. The pressure created by these fluids under the Earth’s crust could be a determining factor in the reaction of the Cascadia subduction zone during what are called the “Big Ones”.

The research – led by Gary Egbert, an electromagnetic geophysicist at Oregon State‘s College of Earth, Ocean and Atmospheric Sciences – reveals more than a few geological surprises, merely by way of explanation. A standout: the other “ocean” of water below the Earth’s surface and well below the Oregon coast or the Washington coast.

Knowing where the fluids are and aren’t could soon give more clues as to which parts of the area are likely to create the worst damage.

Egbert said the research will eventually yield new insights into a seismic phenomenon known as episodic tremor and slip, or ETS. These fault behaviors are related to sudden tremors and slow sliding events that can occur over days. It takes place in the Cascadia subduction zone, where two continental plates meet. A major event along this zone will one day result in an earthquake of magnitude 9.0 or greater that will cause severe destruction along the coasts and throughout the interior Pacific Northwest.

These smaller actions take place along the zone, Egbert said, but they are less frequent and less intense in the large subsurface area known as Siletzia, which mainly crosses the Oregon Coast Range and is ends near Roseburg.

“Water is a key contributor to seismic activity and volcanism in Cascadia,” he said.

This water does not actually enter Siletzia, a formation at least 50 million years old, but it does flow through many parts of the subduction zone near Siletzia.

Finding the location of all this underground fluid was made possible by new software created by Egbert and his colleagues on the project. Thanks to him, they were able to use magnetotelluric data, both offshore and on land, throughout the Cascadia subduction zone. Magnetotellurics is a geophysical technique that uses surface measurements of magnetic and electric fields to reveal underground variations in electrical resistivity.

This in itself is another revelation for those interested in coastal geology: electricity can help you find groundwater.

Subterranean formations like Siletzia are a particularly bizarre and surprising category of coastal geology in Oregon and Washington. This formation, like myriad much older ones on the southern Oregon coast, was “accreted” onto this continent tens of millions of years ago, meaning it slowly joined to this region by the movement of tectonic plates. Although generally below the visible surface, many parts around the coast, Coast Range, and interior Oregon are exposed. (See also Weirdest Science: Possible ‘Ocean’ Beneath the Oregon Coast, North America)

Viral video shows trails of fire in the sky over Montana