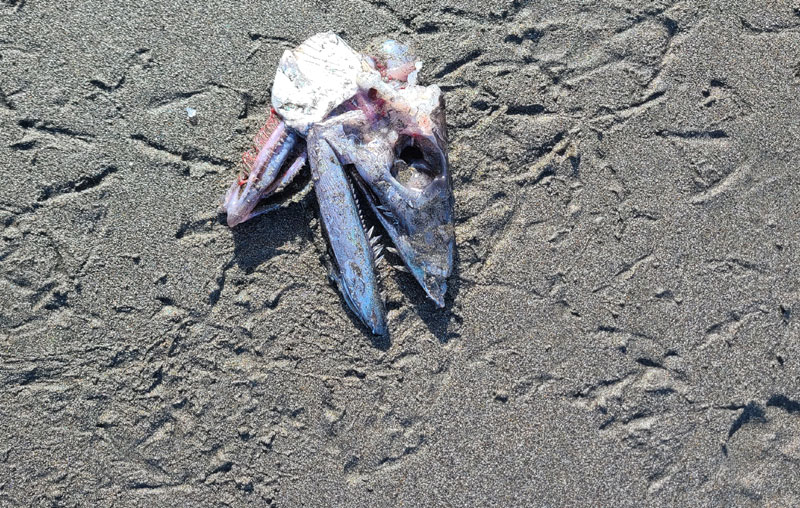 Lancetfish resembling a barracuda found on the southern coast of Oregon

Lancetfish resembling a barracuda found on the southern coast of Oregon

(Gold Beach, Oregon) – A beautiful spring day along the southern Oregon coast somewhere near Gold Beach. The sun is shining, it’s a little chilly and windy but the scenery is inviting. You walk along the beach and suddenly you see what looks like a barracuda in the sand. You think to yourself, “wait, what?” (Photo courtesy “Paul”)

It’s something like what an Oregon Coast Beach Connection reader named Paul just experienced. He was walking somewhere near Gold Beach on Saturday morning when he spotted this unusual creature – which clearly had its head separated from its body, likely by predators eating it.

By taking a photo and later uploading it to some Google functions, he was able to find a likely match. Paul found an older Oregon Coast Beach Connection article showing such a creature.

They often look like barracudas to many people, but are actually long-nosed lancets (Alepisaurus ferox), something a little rare along the Oregon Coast or the Washington Coast. They are found a few times a year along the Pacific Northwest coast, but this is by no means common.

Courtesy of Paul – the body of the creature at Gold Beach

Lancets are a bit more common in some areas off the Oregon coast or the Washington coast, though they live far out in the ocean, according to Tiffany Boothe of the Seaside Aquarium. With its long, iridescent body, spiny parts, and toothy smile, it looks a little menacing – much like some of the strange creatures that lurk well below the surface.

“Little is known about the longnose lancetfish,” Boothe said. “We know they extend from the southern Bering Sea to Chile and occupy surface waters down to 6,000 feet.”

Even with its relative rarity of beach strandings, there are occasional bursts of it. There was an unusual string of lancets all over the Oregon Coast in May 2008, with as many as 20 spotted in areas like Cannon Beach, Seaside, Warrenton, Newport and Lincoln City that spring.

It’s no surprise, then, that the lancetfish is known as a predator, with what Newport expert Terry Morse called “tremendous teeth.” Morse encountered a live one wriggling around the beach once in the late 2000s.

Other finds documented by Oregon Coast Beach Connection include on the southern Washington coast in 2020 and one by Garibaldi on the northern Oregon coast.

“Resembling a barracuda, it’s a fish you wouldn’t expect to come across along the Oregon coast,” Boothe said. “Their beautiful large eyes, sharp fang-like teeth, and snake-like body set this fish apart from most other fish living in the Pacific Northwest.”

Boothe said they had poor digestive systems and when necropsies were performed on them they found stomachs full of whole fish.

“We also know that they are not picky eaters, they have been known to eat over 90 different species of sea life, including each other, and unfortunately they are attracted to plastics,” said Boothe: “Their unique feeding habits, as well as the variable range of depth they occupy, prompt scientists to study their stomach contents.”

You’ll start to see more in the spring and summer along the Oregon Coast and the Washington Coast. Boothe said scientists aren’t sure why.

However, they tend to be accidentally caught in fishermen’s nets and then thrown back into the ocean. That’s one of the reasons you see them washing. MORE PHOTOS BELOW