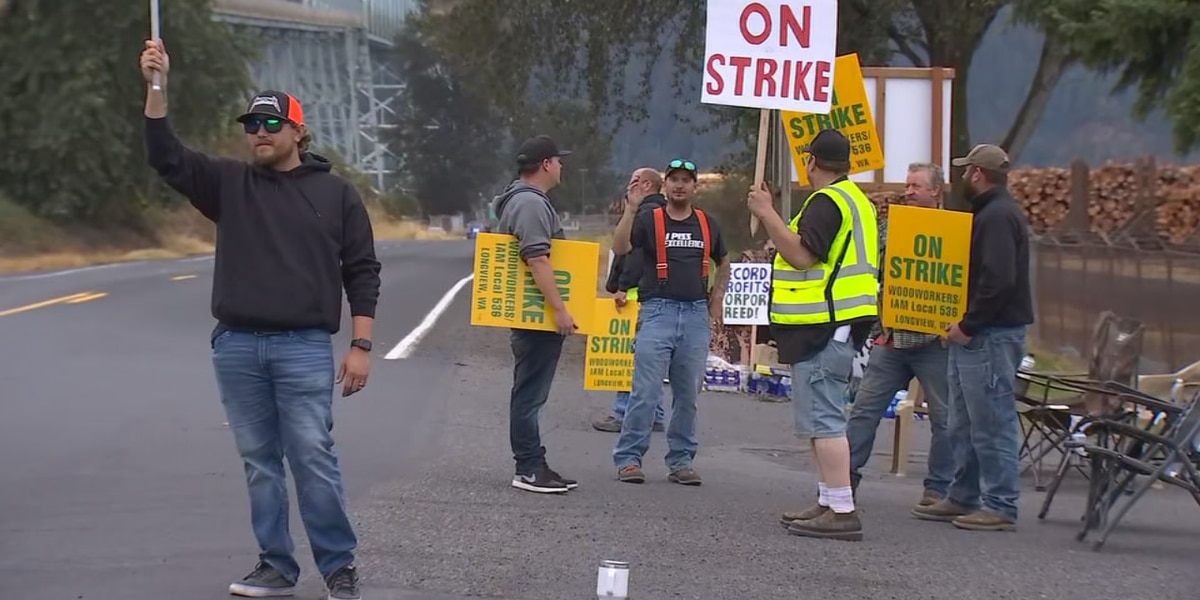 More than 1,100 lumber workers on strike in Oregon and Washington

LONGVIEW Washington (KPTV) — Hundreds of workers at Weyerhaeuser, one of the nation’s largest logging companies, began a massive strike in the early hours of Tuesday in Washington and Oregon.

Workers say the most recent contract talks have failed to deliver a substantial pay rise, a better pension and, under the proposed deal, workers would have to start paying a health insurance premium with no improved coverage.

The strike includes all Weyerhauser workers represented by the union, the International Association of Machinists and Aerospace Workers (IAM).

The Longview Weyerhaeuser sawmill on the banks of the Columbia exports lumber and wood products around the world. It’s normally a busy complex, but since Tuesday thousands of logs that would normally be loaded onto ships and trucks are now piling up. Local IAM union president Kelly Zink said it was the first strike by Weyerhaeuser workers since 1986.

The striking workers say their union contract has normally been successfully renewed with the company every four years, but they say the company is not doing enough to compensate workers in the current economy.

“We’re really struggling to employ staff, to get staff to even show up for interviews, we’ve had openings for millwrights, electricians, production workers,” the supervisor said. maintenance, Rick Davis. “We’ve had several employees literally move across the street for higher salaries.”

Davis says lumber from the Longview sawmill exports lumber as far away as Asia, and lumber from here supplies big-box hardware stores all over the West Coast. Davis says all exports will be halted until a new deal is reached.

“We’ll be here until they want to come back to the table and offer a substantial pay raise and a benefits package.

No senior Weyerhaeuser executives were available for an interview, but a company spokesperson returned a statement that reads:

“While we are very disappointed with their decision to step down, we are committed to supporting our employees and to negotiating in good faith with union representatives. We are ready to continue discussions to produce a contract that is beneficial for employees and sustainable for the company through economic cycles.

It is not yet known where the negotiations are or how long the strike will last.