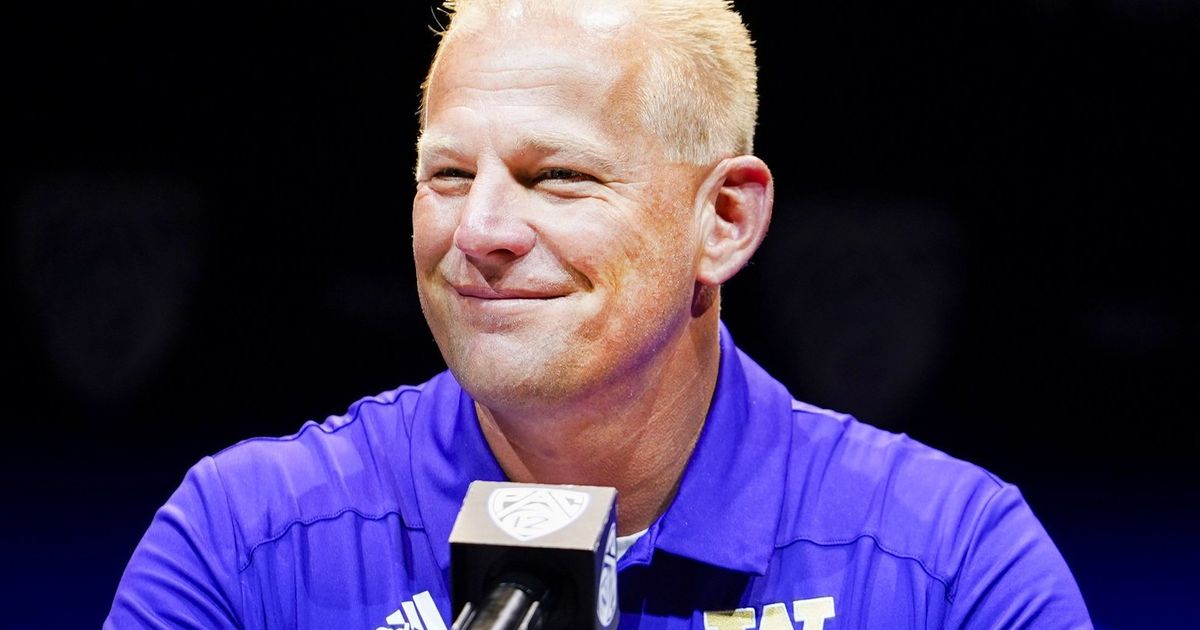 Sitting at a table on the roof of the Novo Theater in Los Angeles, overlooking its most important recruiting region, Kalen DeBoer was asked what has affected Washington’s recruits the most.

And although DeBoer’s response was 318 words long, it can be distilled into three main points:

Whatever the formula, the results were emphatic. One year after Jimmy Lake’s class of 2022 fell to 97e at the national level and 11e in the Pac-12, via the 247Sports Composite, the Huskies rank 20e nationally and third in the Pac-12 in the 2023 cycle – despite a 4-8 debacle that gradually fades in the rearview mirror. Of the 21 official visitors to UW the week of June 19, 14 are currently Husky commits. (A 15e could also happen on Thursday, when four-star Arlington, Texas safety Jordan Sanford announces his college destination.)

In total, UW is touting a total of 19 commitments in 2023, with only 2-3 high school spots remaining — and fall camp isn’t even underway yet. They include long-range prospects — including Lake Charles, La., four-star Curley Reed, Wylie, Texas, four-star defensive lineman Anthony James, Moorhead, Minn., three-star defensive tackle Elinneus Davis and three stars Pierre, SD, quarterback Lincoln Kienholz. They include an unsurprising 11 commitments from the State of California.

They only include two homegrown rookies — three-star Ferndale Landen center Hatchett and three-star Puyallup rusher Jacob Lane — though DeBoer has pledged to improve that effort.

They include proof, it seems, that the formula works.

“I think what the prospects have really seen is that the family that we’re talking about is really happening within our team,” DeBoer said Friday at Pac-12 Media Day. “When they come to training, when they’re with (the current players) on an official visit away from our organized schedule and they ask those questions, they see the energy. They see the authentic answers they get and they see the brotherhood that exists within our program, which we facilitate as coaches.

“But we really try to ensure that our program is player-driven at the end. I think they see that and they feel that and it’s like, ‘Man, this is what I really want to be a part of.'”

Of course, time will tell — as it always does — if recruiting rankings deliver any real results, and UW will likely fall into the top 20 as competing programs add late hires. But given the splash zone associated with the previous staff’s collective recruitment flop, this recovery probably cannot be overstated.

During his introductory press conference on November 30, DeBoer said, “I will be very diligent in building up a great staff, and I think first and foremost (it will be) a staff that can recruit.”

Early feedback has been encouraging — and DeBoer credits his staff for much of this recent recruiting resurgence.

“Then they look at our coaching staff,” he continued in the aforementioned manifesto, “and when you talk about messaging or what (rookies) see or feel, they feel there’s really staff who care about them but are also expert coaches who will develop them to even the next level beyond college.Then on top of that you have a place that has done that.You can go through the last five, six, seven years, and we have numbers that show how many players we’ve put in the NFL – first round, second round, all rounds compared to the rest of the Pac-12 and the country. in the top 10 in all these different areas, regardless of the distribution.

“That happens here because of the resources and the people who are going to invest in you. That’s what I think our staff do best is invest in you individually to help you grow both as person and as a football player. Parents love to hear that. They love to see that. But most importantly, I think they feel it.

Back to Husky’s recruiting rivals…

He didn’t handle it well.

“No, I don’t think so,” he said. “I think it’s a lot more inflated than it is. Our battles are really – the schools we oppose are way more…have academic prowess, like the University of Washington. Our Lady. Stanford. USC. We fight many battles to the end with these schools. So I think it’s made up in your world. In our world, we face teams that perform better academically.

Of course, the phrase “academic prowess” quickly became the topic of social media, and Lake was fired less than two weeks later.

On Friday, DeBoer – Lake’s successor – was asked a similar question, which is no coincidence:

Are there any specific schools that DeBoer thinks UW needs to recruit the most?

“I don’t think it’s isolated to just one,” he said, politely refusing to take the bait. “Naturally, due to geography, we’re going to be competing with Pac-12 schools. But our staff has many connections in the Midwest, even across the country, and even in Texas. So we also compete with many other teams outside the Pac-12. So I don’t think we choose one of, ‘Oh, that’s who we’re going against.’ Honestly, I hope the (commitments) we have, have a lot of offers.

If you think DeBoer has a say in the UW’s final conference destination, think again.

When asked on Friday what he’s hearing from athletic director Jen Cohen and others regarding the ongoing realignment machinations, DeBoer confirmed, “It’s really not much. Probably the most important thing I keep being reminded (by UW administrators) is, “Don’t believe what you read most of the time.”

This is the case for most programs nationwide, as presidents and athletic directors make the vast majority of overall departmental decisions. But while DeBoer is reluctant to state where UW should ultimately land, he’s confident the Huskies will settle into an advantageous position.

“I don’t really have many ideas, except that I know we are a university with a lot to offer. We are a community with a lot to offer,” he said. “I just have a lot of faith in President (Ana Mari) Cauce and Jen Cohen that we’ll end up in a place that’s a great situation for us. I know the Pac-12 leaders are doing everything they can and are doing. really great job exploring the opportunities. We kind of have to let that play out, and we’ll see what happens.

Northwest heat: 14 deaths in Oregon could be heat-related as 13 million people suffocate under heat alerts

Column: The temptation of Saudi money at LIV is in the prize fund