(Oregon Coast) – You might have spotted a couple of them in the past ten years, but there’s a good chance you haven’t. They are somewhat rare. (Photo above: Susan Burr)

Periodically, the red bulbs of Asian ships wash up along the Oregon coast, and they leave people scratching their heads. They are rather large red bulbs, and clearly hardy and sturdy enough to travel from the eastern coasts to the Oregon coast or even the Washington coast.

It’s like a lot of things out there in the ocean: some of them just wash up here no matter where they came from. Some objects are sucked up by ocean currents after being in the Great Pacific Garbage Patch (a huge vortex of man-made debris that lies between Asia and North America), and those currents bring them here. Sometimes they just take a meandering hike along the waves of the Pacific Ocean and drop to those shores, coming from the west, south, or north.

Even to this day, occasional tsunami debris has hit the sands of the Oregon coast: since the massive Fukushima earthquake in 2011.

As of 2014, things from this horrific disaster in Japan were still happening, albeit much less frequently than its peak of about a year. It was in this year that the subject of red bulbs appeared, causing a bit of noise. There have been several incidents where this debris was found, presumably still debris from the tsunami.

One of them caught the attention of Susan Burr, then manager of the inn at Spanish Head (she has sadly passed away since). She emailed Oregon Coast Beach Connection with these photos at the time, which included other fascinating finds. 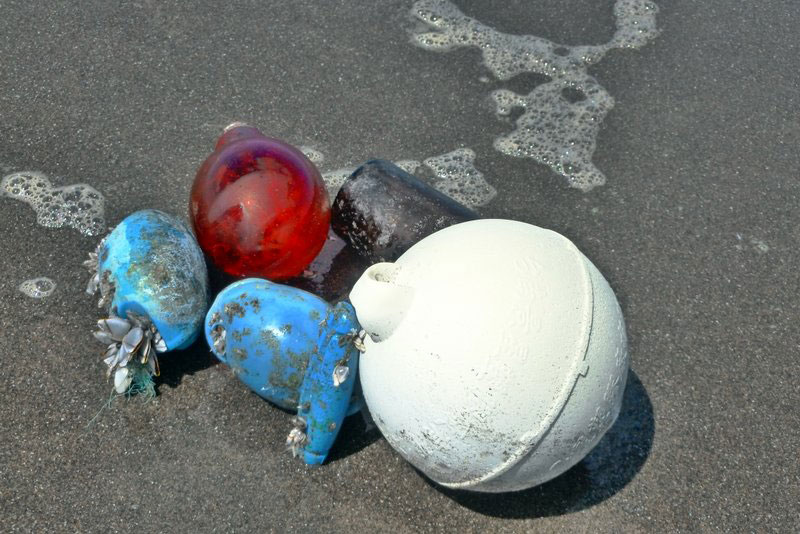 This kicked off some research, which quickly yielded some interesting answers.

Burr and her husband found them in southern Tillamook County, which also included a large palette with Asian scriptures on it. There were also fishing floats, where you can see marine life clinging to the bruises, and at least one bottle.

Oregon Coast Beach Connection passed them on to officials at CoastWatch, the volunteer organization that monitors environmental issues on Oregon beaches, and at the time, Fawn Custer was in charge of that sort of thing.

It turned out she had one on her porch, found the year before on the beach. Custer had already done some research on the matter.

“The bulb was manufactured by Takuyo Riken Co. Ltd. in Fukuoka, Japan,” Custer said. “Takuyo produces commercial squid fishing gear, including underwater lights, as well as other lights and electrical devices for ocean studies. A number of bulbs like this have been found on the west sides of the islands of Hawaii, Maui, and Kauai, as well as the north Washington coast and the Oregon coast.

In 2014, with the debris of the tsunami still somewhat in the news, it was not difficult to determine its origin.

“While some could simply be burnt out bulbs thrown overboard by fishermen, at least some could also come from the hundreds of Japanese fishing boats destroyed and / or swept to sea after the earthquake and tsunami that caused it. result that hit Fukushima, Japan, in March. November 11, 2011, ”Custer said.

Tsunami debris from Japan was still appearing with decreasing frequency at times, but by the end of 2014 there had been a stampede.

Custer said CoastWatch volunteers, beach wardens and park managers contacted Custer about numerous objects appearing on beaches in the weeks leading up to this incident. Three boats, car wheels, plastic crates, large industrial drums and other items had found their way recently, some of them with non-native species attached.

This was the big concern of officials on the Oregon and Washington coasts in 2014: some debris still contained various species, some of which could be considered dangerously invasive species. Some may have destroyed part of Oregon’s coastal ecosystem.

Fortunately, this problem never really arose. Nothing new and scary has taken hold of places like Westport, Seaside, Yachats or Bandon. Yet there were many reminders of the tragedy of that tsunami in Japan.

Oregon Coast Beach Connection hasn’t received any reports of red bulbs since – but that doesn’t mean they’ve come to a complete stop.

Below are photos of other tsunami debris incidents in the early 2010s. 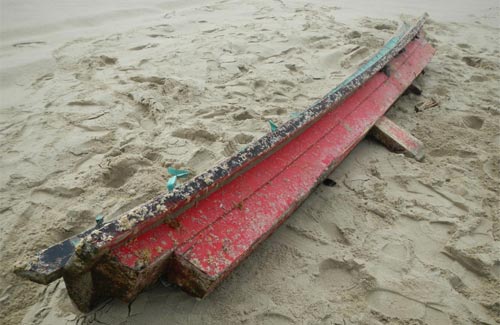 Part of a kasagi, found in Florence – from a sacred Japanese shrine 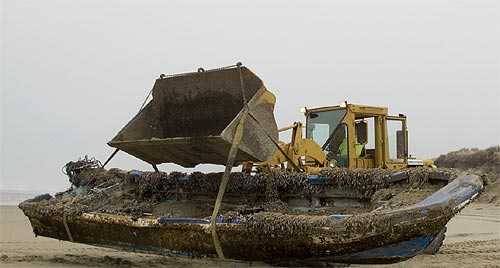