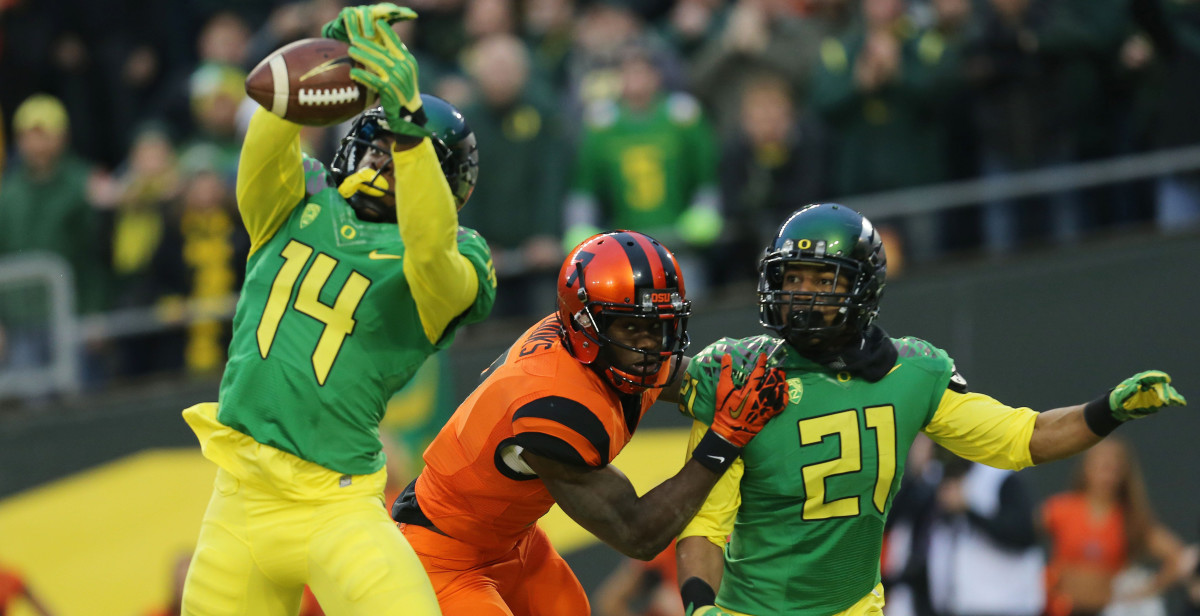 The Ducks have just suffered their worst loss of the season, while the Beavers have won their last two, including a 24-10 victory over Arizona State last week. There are plenty of stories to watch out for ahead of this game: the rivalry, the rise of Oregon State in the Pac-12, Oregon in search of its third straight trip to the Pac-12 Championship.

With that in mind, our team of writers give you their take on who will win this weekend’s game.

It’s hard to find anything to be confident after last week’s beating in Salt Lake City.

Oregon have had trouble passing the ball all season, and wide receivers’ body hits over the past week are another challenge the team will have to overcome. But Oregon State has a passing defense that ranks in the bottom half of the conference, giving up 238 passing yards per game. Which means that they are exploitable.

The Beavs have a far from fatal passing attack so the real concern for me is stopping the run and establishing the run. If the Ducks aren’t fighting in the trenches, this game could get a lot harder than it should be.

It’s time to show off that physique and resilience that has fueled the team all year. The Ducks tend to play well at home and this weekend Oregon takes the win, but the Beavers are giving them all they can handle.

Last week the Ducks were roughed up by Utah on the line of scrimmage all evening and as a result the Utes went wild. Unfortunately for Oregon, the Beavers have the best rushing offense in the conference (229.5 yards per game) led by BJ Baylor and Deshaun Fenwick and a pro-style offense similar to Utah’s system.

On neutral ground and given the injuries for Oregon, I think Jonathan Smith would be able to clinch a victory over the Ducks for the second straight season. But fortunately for the Ducks, this match will take place at the Autzen Stadium where the program has not lost since 2018.

Ultimately, it will be a tighter game than most Ducks fans would like, but the Ducks will be leaving the field as the champions of Pac-12 North thanks to a late defensive save.

Before the start of this season, very, very few people would have expected the Oregon-Oregon State game to decide the Pac-12 North. Oregon gets the division with a win, Oregon State wins the North with a win and Washington State wins against Washington, and the Cougs get it if they win and Oregon loses.

Oregon is coming off an embarrassing loss to Utah, and the Beavers are riding high after a 24-10 win over Arizona State. This game is going to be a very close one, as are most of the games between these two programs, but I think Oregon will have a big fourth quarter to close it and win the North for the third year in a row.

In what is the most important head-to-head between these two teams since the “War of the Roses” in 2009, the Ducks will need to improve considerably from last week if they are to win the North.

I expect to Travis dye to get a lot more touches this weekend than last weekend, and the Ducks defense will play with an energy it hasn’t had for a long time. All in all, the Ducks are doing enough on offense while stopping the Beavs’ running offense.

The Ducks and Beavers face off again and this time it’s two teams that have very different results. The Ducks were demolished in Salt Lake City while the Beavers dominated the Sun Devils at home. The Beavers have been bad on the road this season, with losses to Purdue, Cal and Colorado on the road.

I think it’s going to be more of a mentality game for the Ducks. Can they turn the page and clinch a rivalry victory with a Pac-12 championship and a Rose Bowl still on the line? I believe they can.

Check out our forums HERE