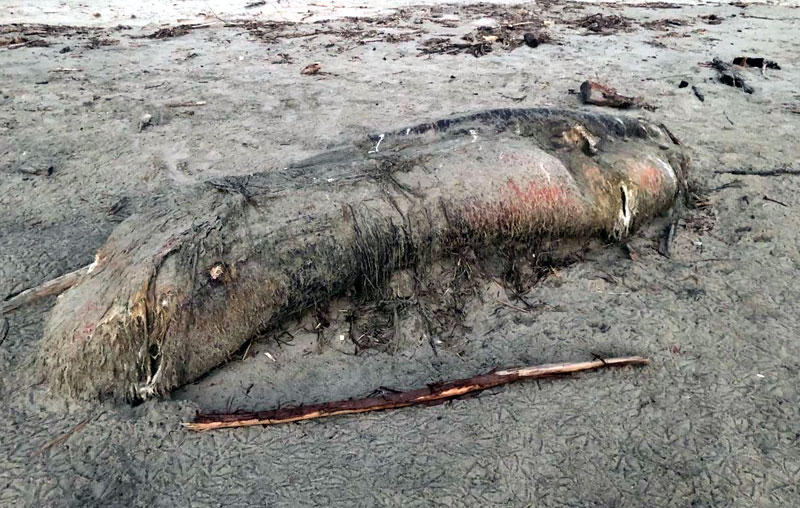 (Rockaway Beach, Oregon) – Taking a trip to the Oregon Coast always results in a number of new scents and aromas, in varying degrees of pleasantness.

Just this weekend, Portlander Rachel Sip, her husband Dave and her two children stepped out of their Rockaway Beach rental and were immediately hit by a new smell. The sands here offered something different in the air, and Sip said “it wasn’t until we got to the creek that I saw where it was coming from. Super fragrant.”

They were puzzled. At first Dave thought it was hairy and possibly a dead cow.

When she sent the photos to Oregon Coast Beach Connection, we immediately recognized it: a globster. Passing it on to Seaside Aquarium for verification, director Keith Chandler confirmed it. And they knew that once upon a time there was a smelly creature, which still appears as a mysterious, smelly cryptid to the uninitiated.

A globster is a long-used but still somewhat unfamiliar term for these types of creatures that end up on shores, appearing hairy and deformed to the point of being recognizable. They may be the remains of most sea creatures, but they’re so decomposed that you can’t tell what type of beast it is or what part it is.

Around the Oregon Coast or the Washington Coast, it is usually a piece of a long-dead whale.

“As for the blobster, it’s been around for a while,” Chandler said. “It’s some kind of cetacean but we really didn’t know what type other than the really gross type.”

This is – hands down – the most disgusting thing you can find on the Oregon Coast or the Washington Coast. It’s the kind of story boys like to tell their friends in a game of who can piss the other off the most. The smell is so bad that it is intolerable. And that disgusting hair? Hope you’re not eating while reading this. It’s just rotting flesh: so broken down and so softened that it creates this hair-like effect.

These particularly sickening forms of beached whale corpses have actually spawned paranormal legends in the past. There’s an interesting story there, and the whole globster thing has a bit of a niche on the internet.

In fact, historians believe that this is where some mythological stories about the sea come from or certainly many tales of sea monsters in the past, certainly since the Middle Ages.

In many cases, something has been decaying along the Oregon Coast or the Washington Coast for a long time and then pieces have fallen apart. One of these pieces ends up on the beach, with a completely different shape than you’ve ever seen before – and that weird furry look. History books and paranormal websites are full of quotes about possible new creatures never seen before, like rotting dinosaur bodies or even aliens, only to be debunked like a piece of rotting squid or whale.

In the early 20th century, these claims were extremely popular, but not all of them can be blamed for their misguided fervor. Later in the century, DNA testing finally proved what was really going on.

It seems the term “globster” was coined in 1962 by a bumbling biologist named Ivan T. Sanderson, who wrote outrageous claims about a discovery in Tasmania with “no visible eyes, no definite head, and no apparent bone structure.”

Appropriately enough, he seemed to have left that field and moved into science fiction for a while, and got involved in the pseudo-science of cryptozoology.

If you come across a globster, don’t touch it – it’s likely to contain very bad bacteria. You’re unlikely to want to go near it, anyway.