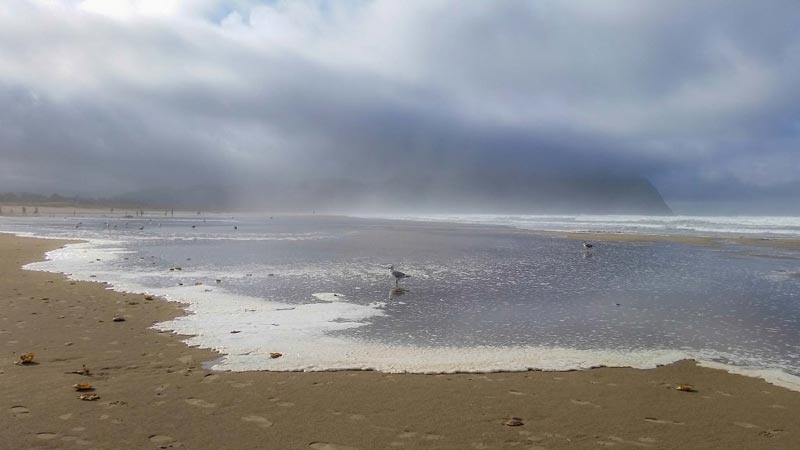 (Oregon Coast) – For those who have grown up or lived in Oregon and Washington State for some time, the dangers of sneaker waves on the shoreline usually don’t come as much of a surprise (although there are many who still do not know or understand danger). You hear about it quite often. (Sneaker Wave at Seaside, photo courtesy of Seaside Aquarium)

However, those visiting the Oregon coast or the Washington coast from out of state should be warned and educated, and even then there is some resistance. Now it turns out that there may be a reason for this.

Many here will find it surprising that sneaker waves are more common on the South Washington Coast and the entire Oregon Coast than in many other places in the world, and certainly compared to other parts of the world. United States. In fact, they hardly exist. on the California coast, the Gulf of Mexico and probably much of the eastern seaboard of the United States.

In fact, the frequency of sneaker waves decreases as you head north on the Washington coast.

It’s hard to quantify exactly how different this coastline is from others, but Tyler Kranz of the National Weather Service (NWS) Portland office has said he’s found plenty of evidence to support it’s a bit peculiar here. .

â€œThere is some truth to this sighting,â€ Kranz said.

Although he admitted he couldn’t speak directly to other beaches around the world, he noted that sneaker waves were happening in places like South Iceland, Western Australia and Tasmani, among others. Admittedly, when it comes to the United States, however, there is more of a problem with rising tides on the East Coast and Gulf States than with sneaker waves.

It all depends on the type of sea conditions we encounter on the Oregon and Washington coast.

â€œSneaker waves tend to occur more frequently in sea state conditions characterized by long-lasting swell with wave heights of at least 5 feet,â€ Kranz said. “The higher the wave height and the longer the wave period, the more likely it is that a sneaker wave will occur.”

That, added to the geography of the near shore environment, combines to make these coasts more prone to the sneaker wave phenomenon.

Kranz said the Portland office of the NWS sends enhanced sneaker wave threat advisories when swell heights are greater than five feet and the swell period is greater than 12 seconds. If, for example, wave heights exceed nine feet and the periods between swells are 14 seconds, that’s an even greater threat. Then the NWS sends out warning messages, but especially if there is an upcoming weekend or holiday where more people are likely to be there.

The Oregon coast is also not unique to rip currents, but Krantz said they are also more common in the east, especially as more swim in the warmer waters of the Gulf.

â€œThe Washington coast certainly sees sneaker waves as well, but the Washington coast is mostly rocky and steep rather than gently sloping sandy beaches like much of the Oregon coast,â€ Kranz said. “A wave of sneakers pushing up a rocky cliff where there is no one is okay, but a wave of sneakers growing on a popular sandy beach with a gentle slope (like Cannon Beach and many of our other beaches) can be life threatening as you know. Unfortunately, we typically see at least one fatality a year somewhere along the Oregon coast due to sneaker waves and the dangers associated with them. “

Samantha Borth of the Seattle office of the NWS confirmed what Kranz was saying about the Washington coast. There, sneaker waves are more common south of Grays Harbor (Westport, Long Beach, for example), but less north of there. The coast becomes more rocky in this area until the Olympic National Park.

â€œWe can see them on the North Coast of Washington, based on the data we have from the past two years,â€ Borth said. “We can see them around Cape Flattery, but not as often as around Grays Harbor in Pacific County.”

Oregon Coast Beach Connection recently received comments from readers indicating that those in other coastal states are struggling to understand this concept of sneaker waves. This new angle of the phenomena more common to the NW then becomes important when it comes to educating visitors about the dangers, not to mention those who live in landlocked countries.

â€œThe problem with sneaker waves is that they can surprise people when they are just walking along the beach,â€ Kranz said. “For people used to walking along the beaches of the east coast of the United States, the Gulf of Mexico or southern California, these waves of sneakers can be a big surprise if they have never been to the coast. of Oregon before or are unaware of the dangers we face. facing the beaches of Oregon.