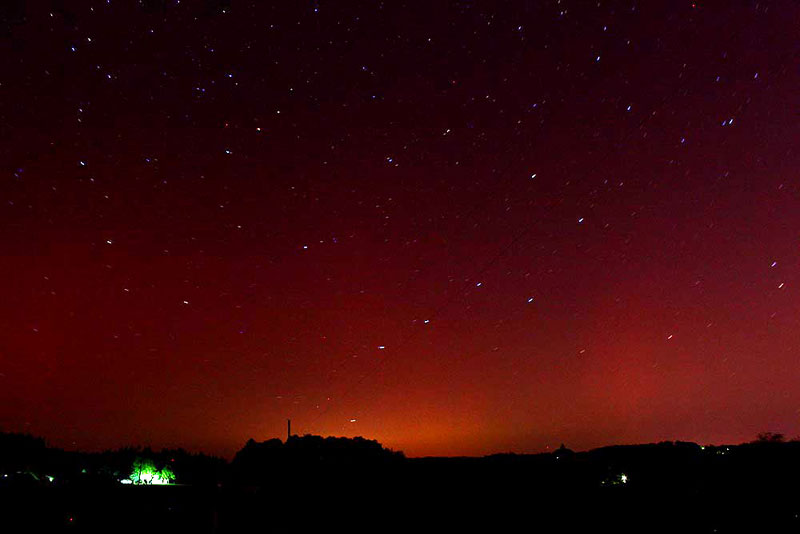 The Northern Lights rise along the Washington, Oregon coast

The Northern Lights rise along the Washington, Oregon coast

(Seaside, Ore.) – A geomagnetic storm watch is in effect for much of the planet from October 30 to 31, after a large eruption and coronal mass ejection (CME) occurred early in the morning yesterday.

Translation: There’s a good chance you will see the Northern Lights as far south as northern California. With generally clear skies over the next two nights on the Oregon and Washington coasts, these areas will be in a prime position for spotting the Northern Lights. However, Sunday appears to be cloudy in the area, so a Halloween Northern Lights sighting will be unlikely on the beaches.

Scientists say it’s the strongest solar flare that has been fired from the sun during this recent cycle of solar activity.

The power of this ion storm bodes well not only for seeing it on the Oregon and Washington coasts, but perhaps for spotting it with the naked eye and without the aid of cameras.

“The analysis indicated that the CME left the Sun at a speed of 973 km / s and is expected to arrive on Earth on October 30, with effects likely to continue until October 31,” said the National Atmospheric and Oceanic Administration (NOAA).

The only area that will not be visible is the southern Oregon coast, where the forecast calls for cloudy skies on weekend evenings.

Jim Todd, astronomy expert at OMSI in Portland, is excited about the possibilities of three nights of ion exposure.

â€œLooking at the predictions, the odds of seeing the Northern Lights for Oregon (mid latitude) indicate 5% for Friday, October 29; 45% for Saturday October 30; 40% for Sunday, October 31, â€Todd said. â€œThe weather forecast for the Willamette Valley is favorable with partly cloudy skies overnight. The waning crescent moon will be a non-factor. Check the predictions before you go.

Todd said it’s important to get away from the city lights if you’re going to be looking for this, which makes the Northwest Coasts great places to look.

Oregon Coast Beach Connection recommends heading to high viewpoints with no major blockages to the north. Look for the high-gravel just south of Yachats, Cape Foulweather near Depoe Bay, Anderson’s Viewpoint just south of Cape Lookout State Park, Cape Disappointment in Ilwaco, or the viewpoints right at south of Cannon Beach. The long flat stretches of Washington’s south coast will also be favored.

â€œThe best bet is to take a digital camera (DSLR or advanced smartphones) on a tripod and take 3-5 second exposures towards the northern horizon,â€ Todd said. â€œIf the image shows shades of green to red like curtain-like images, there’s a good chance the aurora is active. Sometimes the aurorae are low and faint above the northern horizon, not visible to the naked eye. Auroras can last a few minutes or a few hours.

As for the timing, it’s hard to pin down.

â€œThe K-index near 7 indicates that some active auroras are possible after sunset until sunrise,â€ Todd said. “Keep in mind that the strongest levels may be during the day, so the timing and strength determine visibility at night.”

The sun’s cycle of intense solar flares is still approaching its peak, which it will reach in 2024, Todd said.