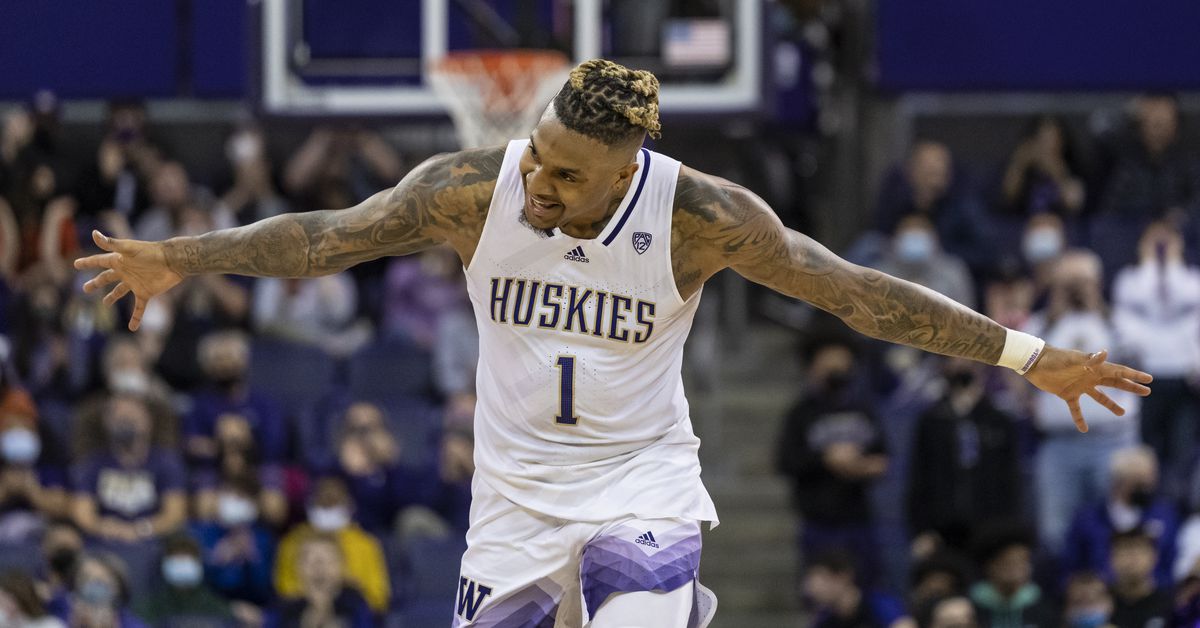 Husky fans have been waiting for an indication of the upcoming turnover for Washington’s basketball program this offseason. The first big news came out today as Nate Roberts announced he would sign with an agent and declare himself for the NBA draft.

The 6’11 Roberts had 2 more years of eligibility but will graduate and look to pursue a professional career. Roberts averaged career highs across the board as Washington‘s starting center with 5.5 points, 7.5 rebounds and 0.7 blocks per game. He finished the regular season with a career-best 18 points and 16 rebounds against Oregon followed by 13 points and 16 rebounds against Oregon State. Over the last 10 games of his career, he averaged 7.4 points and 9.6 rebounds. It raised hopes that he would return for another season and build on that performance, but Roberts will move on instead.

There’s no chance Roberts will be drafted, but with his size and rebounding ability, he’ll be looking to make a career overseas or hang on to the G League. He finished 24th nationally in offensive rebound rate, so there’s no doubt he can do it on another level. Offensively, Roberts has never been able to pose much of a threat. He shot just 21/31 on dunk attempts and 57 percent overall on paint shots. On post-up attempts, Roberts averaged an atrocious 0.59 points per 100 possessions, demonstrating the lack of touch and footwork. For someone who often draws physical comparisons to Dwight Howard, that’s just not good enough to be a star player.

Roberts joins graduates Terrell Brown Jr. and Daejon Davis as starters on this year’s squad that will need to be replaced. Bench player Dominiq Penn announced last week that he was entering the transfer portal. Fellows Riley Sorn and Jamal Bey, like Roberts, have also completed 4 years in Washington, but there are still eligibility requirements and could choose to turn pro or transfer in addition to returning.

Roberts’ departure ensures there will be at least one opening (and likely a few more) through the transfer portal or a late addition through the recruiting class of 2022 from someone who opted out due to a change of coach. If nothing else were to change with the Husky roster before next season, that would likely mean Langston Wilson would be the starting center with Riley Sorn and Jackson Grant as backups. Mike Hopkins will almost certainly be looking for a player with proven experience there to try and plug the hole rather than just relying on this group.

Right now, the top big man on the transfer portal is Utah Valley center and BC native Fardaws Aimaq, but UW would fight every program in the country for his services. The only Portal center with Seattle ties at the moment is Lehigh transfer Nic Lynch, who is a 5-under-average rebounding stretch and would be a rotation piece rather than a clear starter if he came to edge.

If Washington enters next season without adding a center through the transfer portal, that will mean hoping for giant leaps from Langston Wilson and Jackson Grant. Wilson is an athletic freak who is new to the game and had flashes like when he scored 11 points in 9 minutes against UCLA at the end of the year. If he learns to control his physique and become less foul-prone (9.0 crazy fouls per 40 minutes in Pac-12 play), there’s reason to think he could be a really good player. Grant was a 4-star rookie entering this year billed as a great shooter who finished 1/11 out of the paint and seemed to overthink it. According to Hop, he also lost a large amount of weight due to the COVID mid-season, which led to him being taken out of rotation. If he’s able to get back into shape with a full offseason in the zone, we could see him take a big step forward.

Although Nate Roberts never put it all together, it was clear that he had become a team leader and that Hopkins had always valued him for his actions off the court. Despite the obvious downsides (his hands), he also had some dominating strengths that were fun to watch when he was in his prime. I wish Nate good luck in his future endeavours, both inside and outside the basketball world. Thanks Nat!