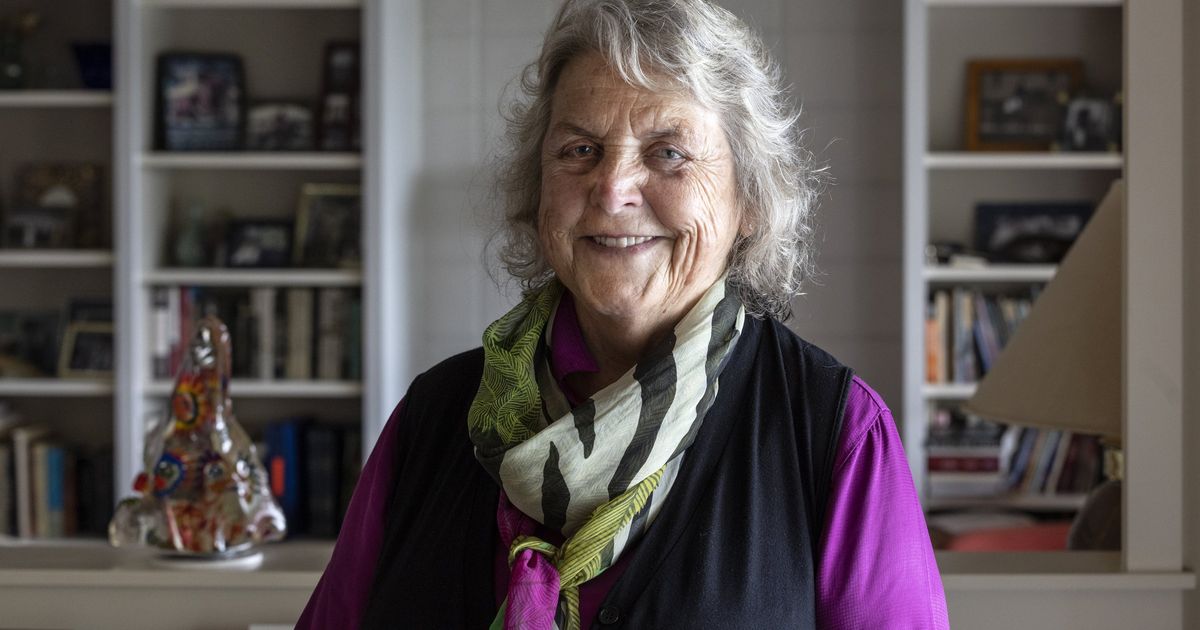 Washington doctor at the forefront of abortion rights looks to the next frontier after Roe: Pills

Several years ago, an abortion rights activist reached out to Dr. Suzanne Poppema, a retired reproductive rights leader from her Seattle-area practice. As states passed abortion restrictions, plans were underway for an offshore internet service that would provide abortion pills to women who couldn’t get them at home.

Would Poppema get involved?

“People tried to talk me out of it,” Poppema recalls. “You better watch out,” they told him. She could lose her license.

“You know, I’m retired,” she said last week from her home overlooking Puget Sound. “I will soon be 74 years old. Oh my God, take my license? I do not care.”

Poppema began acting as a consultant for Aid Access, founded by a Dutch doctor known for performing abortions on ships in international waters near countries that ban the procedure.

While Roe v. Wade looks set to be overturned, as a leaked draft opinion from the U.S. Supreme Court suggests, a growing number of women are certain to turn to discreetly mailed abortion pills to get around laws aimed at preventing them from terminating their pregnancies. Such pills, meanwhile, could be a way for doctors in Washington and other states with strong abortion protections to serve these patients.

The anti-abortion movement, however, tries to prevent this from happening. According to the Guttmacher Institute, nineteen states require a provider to be physically present when dispensing abortion pills, and Roe’s end would likely bring new limitations.

This puts Poppema in the middle of one of the hottest ongoing abortion debates, albeit behind the scenes: She is not named on the Aid Access website and does not write prescriptions. Out of reach of US authorities, the Dutch doctor has handled many of the 30,000 prescription packets distributed by Aid Access so far, according to Poppema.

Learn more about the Supreme Court and abortion

Dr. Sarah Prager, professor of obstetrics and gynecology at the University of Washington and former intern at the Poppema Clinic, Aurora Medical Services, said she was not surprised by her former mentor’s involvement in AidAccess. It’s a prime example, Prager said, of how Poppema has been at the forefront of abortion access for decades, asking, “What’s next?”

Poppema was one of the first women to perform abortions shortly after Roe came into force in 1973, wrote a book called “Why I Am an Abortion Doctor” in which she revealed her own abortion , helped found Physicians for Reproductive Health and trained a generation of abortion providers.

Young doctors may not know Poppema’s name, said Deborah Oyer, medical director of Cedar River Clinics, but “she kind of had an impact on the ability of all providers in Seattle to perform abortions.” .

Vitriol has also caught on. After the 1996 publication of her book, written with Seattle-area journalist Mike Henderson, an anti-abortion website called her “hardened and callous” and accused her of “ripping babies developed limb by member”.

After a wave of violence against doctors and abortion clinics began in the 1990s, Poppema bought a bulletproof vest.

“It occurred to me that she might be murdered,” said her husband, Dr John Cramer, a retired critical care doctor. He said their two sons would ask, “Mom, are you okay coming back?”

Once so shy that a teacher told her mother she never spoke, Poppema had a feminist awakening while a student at Harvard Medical School. She signed up in 1970, the same year the feminist book on women’s health “Our Bodies Ourselves” came out., among what she said was then the largest female class ever admitted.

About two dozen of his 150 classmates were women.

Poppema moved to Seattle in 1974 for a residency at a clinic offering abortions. A man ran the clinic, Poppema said, but “Seattle was a perfect place to be a budding feminist.”

The women formed self-help groups of all kinds, and Washington voters passed a referendum legalizing abortion in the first four months of pregnancy three years before the Roe decision.

Then, shortly after moving to Seattle, Poppema got pregnant herself.

“I could see my career plans crumbling at my feet,” Poppema wrote in her book. “I was terrified of being a single mom, especially since I had always believed that having two parents was the best way to grow up.”

The doctor who performed her abortion told her, “Suzanne, you will be a better family doctor because of this.

Telling the story nearly 50 years later, Poppema had a catch in her voice. “It meant a lot.”

Later, dealing with shamed patients, Poppema said she would tell them, “You are making a decision that is right for you at this time in your life. It doesn’t make you a bad person.

Poppema went to France in 1989 to observe patients receiving mifepristone, an abortifacient drug that has just been approved there. Five years later, his clinic began participating in US trials.

“I thought that was it. This is going to change the face of the abortion world,” she said.

Providers do not need surgical skills, and patients can take mifepristone and a second drug administered up to 48 hours later, misoprostol, at home. The effect is the same as a spontaneous miscarriage.

The United States Food and Drug Administration approved the use of mifepristone in 2000, which blocks a hormone necessary for the continuation of pregnancy and causes the fetal tissue to detach from the uterine wall, up to the 10th week of pregnancy.

Misoprostol, which causes contractions, was already widely available for a variety of uses, including treating miscarriages in cases where the tissue is not fully discharged.

But the FDA has placed restrictions on the use of mifepristone. Among them: a specially certified health provider had to give the pill to patients in person.

However, medical abortion has gradually developed. In 2020, it accounted for 54% of abortions in the United States, according to the Guttmacher Institute, a research organization focused on reproductive health.

As a part-time Aid Access volunteer, Poppema sifts through lengthy online intake forms to spot reasons for caution: drug allergies, for example, or health risks. If none exist, Aid Access offers the pills for a sliding scale fee of around $100.

Poppema said she insisted that Aid Access give this instruction: “If you are seeking emergency care, do not say anything about taking pills. No one can detect them. And you will be treated much better.

There’s no reason to mention drugs because the complications and treatment are exactly the same as a spontaneous miscarriage, she said. Drs. Oyer and Prager agree.

“There is absolutely nothing to be gained if a patient discloses this information, and in many states such disclosure could expose the patient, and possibly health care providers, to lawsuits,” Prager said.

Aid Access also informs patients of a helpline, staffed by Poppema and other volunteer doctors, that they can call if they need help.

The FDA in 2019 ordered Aid Access, which uses an Indian pharmaceutical company, to stop selling unapproved pills to Americans in the USA

The FDA did not enforce its order but said it “remains very concerned about the sale of unapproved mifepristone.”

These drugs, the agency said in an email, “are not subject to FDA-regulated manufacturing controls or FDA manufacturing facility inspection.”

Last year, with COVID-19 raging, the FDA lifted its requirement that mifepristone be administered in person, paving the way for the pills to be mailed. More US physicians have become involved with Aid Access and several new online medical abortion providers, Poppema said.

But the FDA left in place other disputed restrictions, including that providers must be specially certified to prescribe mifepristone.

The decision sparked a firestorm, with anti-abortion activists saying it opened the door to unsafe, unsupervised abortions, and those on the other side saying the FDA was clinging to unnecessary hurdles.

States continued to erect their own barriers, such as banning telemedicine for medical abortion and effectively requiring providers to be locally licensed.

Yet demand has surged at Aid Access, which now sends 1,200 to 1,600 packets of pills a month – more than it distributed in an entire year, according to Poppema.

Initially, she said, the patients were largely from Texas, which allows private citizens to sue anyone who helps facilitate an abortion after about six weeks of pregnancy. But now patients come from all over, including Washington, Oregon and California.

Between 5% and 10% of requests for help in recent months have come from women wanting to have pills on hand in case they become pregnant and face abortion restrictions triggered by the end of Roe, according to Poppema. Aid Access also serves these women.

Poppema, who expects an increase in the number of patients with access to help if Roe is reversed, sees the next step for abortion advocates is to persuade the FDA to drop restrictions preventing all providers from health care and pharmacies dispense abortion pills.

Then, she said, providers across the country could seek orders from states banning abortions under the guise of “miscarriage management.”

Poppema said pharmacists can’t ask questions because of federal patient privacy law. As for people who might sue because the pills were used for abortion, she asked, “How the hell could they prove that? Just curious.”

‘Outsider’ appears to be winning in Oregon’s Democratic gubernatorial primary