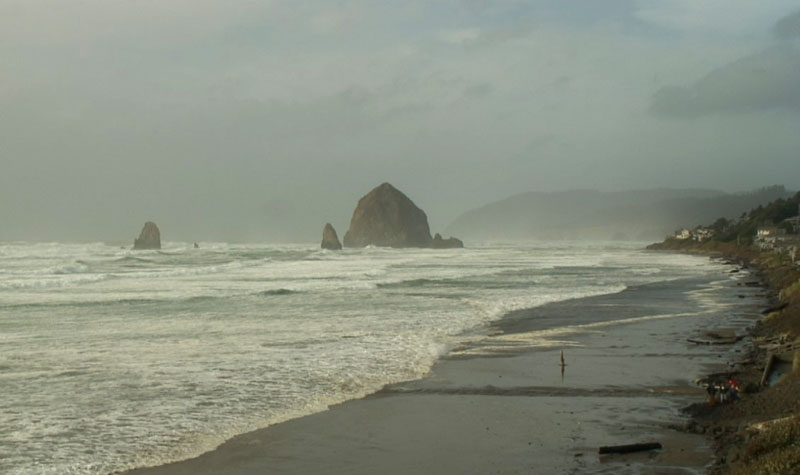 (Manzanita, Ore.) – Higher surf and flood warnings have been issued from top to bottom along the entire length of Pacific Northwest beaches, along with new severe wind warnings. (Above: storm surges at Cannon Beach on Sunday, courtesy Tolovana Inn webcam)

The National Weather Service (NWS) now says waves of 40 feet are possible in some areas, raising earlier forecasts to 30 feet to 35 feet. Various webcams around the Oregon coast and the Washington coast show dangerous conditions on Sunday.

The NWS also said on Saturday that tornadoes or waterspouts would be a possibility under these conditions on Sunday, but so far that has not materialized.

For the southern Oregon coast (from Reedsport to Brookings), the warning is until 7 a.m. Monday, but a high wave warning is extended there until 5 a.m. Tuesday.

â€œBig waves and dangerous surf conditions with breakers up to 40 feet are also possible,â€ the NWS said. â€œA coastal flood warning means that flooding is in progress or imminent. Coastal residents in the warned area should be alert to rising water levels and take appropriate action to protect life and property. extreme caution along beaches. Unpredictable and destructive waves can crash onto beaches, piers and other structures without warning. Beach erosion is possible. “

For Washington’s north and central coast, the flood advisory expired at 4 p.m. Sunday.

For Washington’s north and central coast, the high wave warning is in effect until 11 p.m. Monday. Waves of 24-28 feet expected in the surf area.

For Washington’s south coast, north and central Oregon coast, the high wave warning remains in effect until 5 a.m. Tuesday – although it is again incorporated into the flood warning coastal for this region. The NWS said 40-foot waves are possible along the surf area.

For the southern Oregon coast, the high wave warning is in effect until 11 p.m. Monday, with waves of 24 to 28 feet expected in the surf area.

Coastal flood warnings Washington and Oregon coast. From southern Washington to the north and central Oregon coast, coastal flooding is expected. This warning remains in effect until 5 a.m. on Tuesday. The NWS said flooding could occur a foot above ground level just above the beaches.

On the south coast of Oregon, this warning is in effect until 7 a.m. Monday.

â€œTake the necessary steps to protect properties prone to flooding,â€ the NWS said. “If travel is necessary, do not bypass barricades or cross waters of unknown depth. Beaches and coasts will become dangerous due to very large and potentially fatal waves. Stay away from beaches, rocks, jetties , piers and other waterfront infrastructure. “

Sunday in Lincoln City: Note that there is no beach with these surges below the Spanish Head Inn. Photo courtesy of Spanish Head Hostel / KATU webcam

Strong wind warnings. For Washington’s north and central coast, the high wind warning is in effect until 6 p.m. Monday. Southerly winds of 40 to 50 mph with gusts up to 70 mph are possible in this area of â€‹â€‹Aberdeen across the Olympic Peninsula.

On the north and central Oregon coast, the warning is in effect until 9 a.m. Monday. Winds southerly 35 to 45 mph with gusts up to 65 mph expected near beaches and headlands.

There are no severe wind warnings for the southern Oregon coast.