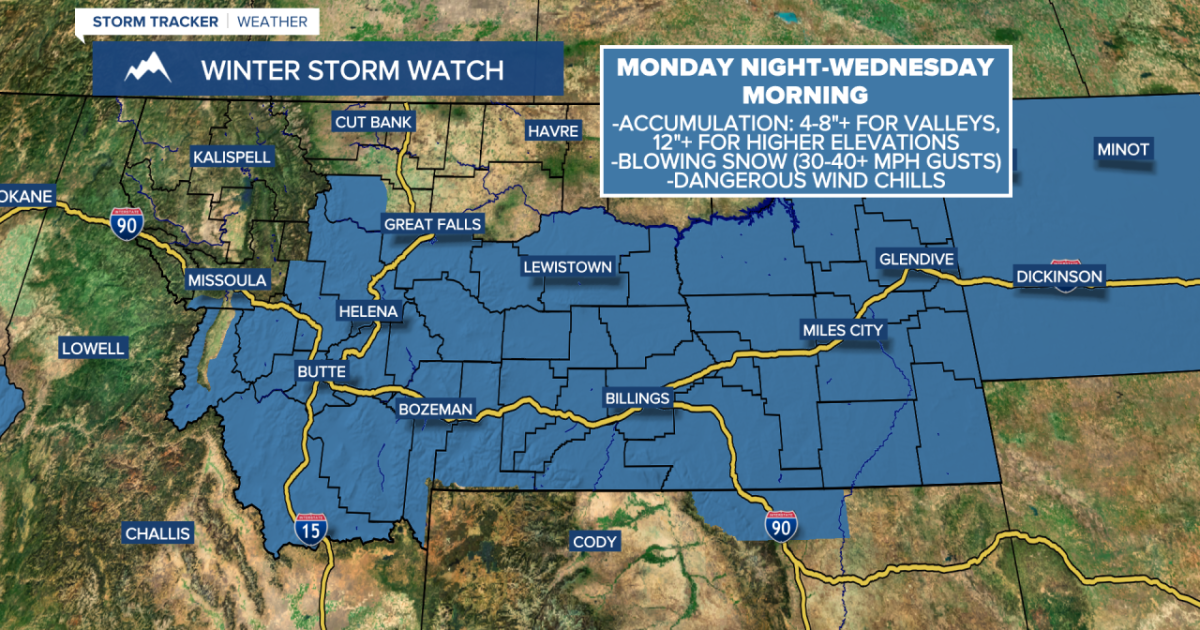 After record high temperatures on Friday, temperatures were around 20 to 30 degrees cooler on Saturday. The cooling trend continues on Sunday with highs in the 30’s. A cold front from the north brings a series of snow showers Sunday afternoon and evening. A moderate to heavy flurry of snow accompanied by gusty winds could make travel difficult, but conditions improve once the front passes.

Attention is on the major winter storm that will affect the state Monday evening through Tuesday. Low pressure moves ashore over the Oregon Coast Monday morning, so most of the day remains dry. However, snow develops after lunchtime in southwestern Montana to replace the rest of central and southern Montana after midnight. The wind will shift from the northeast to the east as the storm moves south causing an upslope and therefore a snow eruption over the rest of the region.

The storm strengthens as it moves through the Dakotas, bringing heavier amounts of snowfall to southeastern Montana as well as near-blizzard conditions. The snow begins to subside Tuesday evening and the condition begins to clear Wednesday. A mass of cold air remains in place for several days beyond that with wind chill potential below zero.

Sunday: Scattered snow showers, especially in the morning. Accumulations will be light, if any, due to the high angle of the April sun. High temperatures in the upper 30s. WSW wind shifting to NW with the frontal passage 10-15 MPH gusting to 35 MPH at times. Mostly cloudy skies overnight as temperatures drop into the upper 10s and low 20s.

Monday: A few snow showers around. Otherwise, mostly cloudy skies. Fresh wind from the NE at 15-20 MPH gusting to 35 MPH. High temperatures in the mid 30s. Snow is forming, moderate to heavy at times. Road conditions begin to deteriorate rapidly overnight as temperatures drop within 10s. The wind increases and changes easterly direction overnight and has sustained 20-25 MPH with gusts to 45 MPH.

Tuesday: Snow, potentially moderate to heavy in the morning. Sustained ENE wind at 20-25 MPH gusting to 45 MPH at times. Temperatures high in the mid 20s. Snow lessens during the evening as temperatures drop to the upper 0s and lower 10s.

Thusday: Mixture of sun and clouds. High temperatures in the upper 30s. Overnight lows in the upper 0s and lower 10s. A few flurries developing overnight.

Friday: Rather cloudy. Snow showers possible. High temperatures either side of 40 degrees. Nighttime low temperatures in the mid 10s.