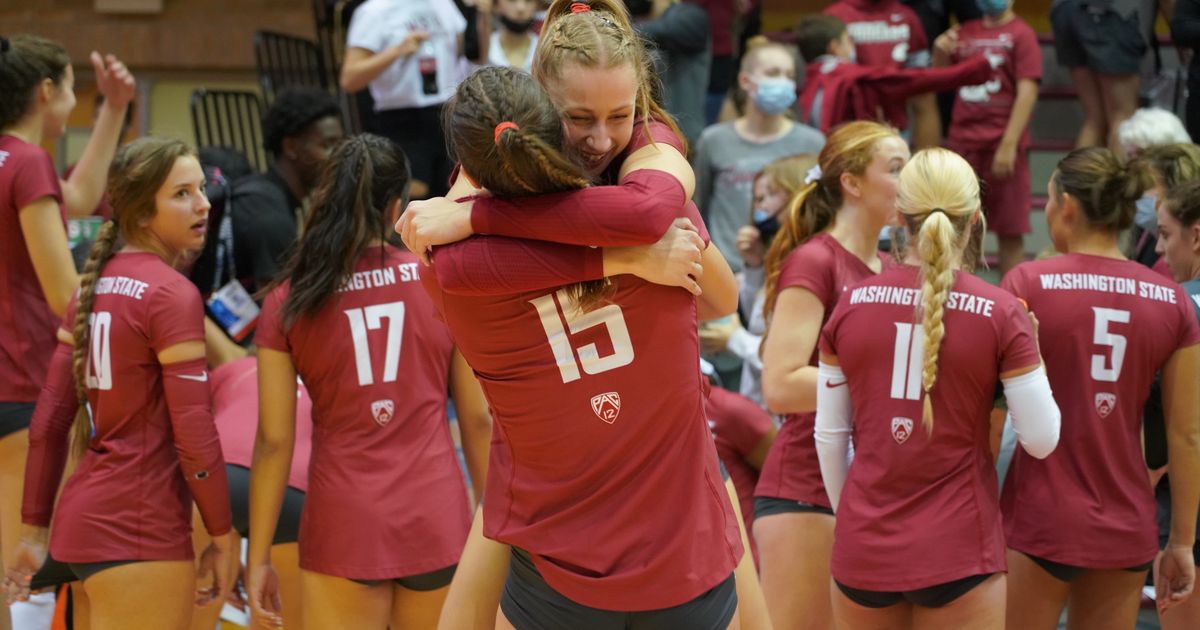 WSU volleyball victory over rival Washington “one for the ages”

Washington State University volleyball players were rightly off Monday after working overtime on Sunday in a memorable victory over rival Washington.

WSU coach Jen Greeny started playing volleyball in 1991 and coaching the sport in 2000. She has never made a match like Sunday’s five-set thriller. Few have.

â€œIt definitely seemed a little surreal in this fourth set that it was never going to end,â€ said Greeny. â€œI think people are getting what they pay for. It seemed a little crazy that you kept looking at the dashboard and the numbers got higher and higher. Washington is such a good program and it was definitely a great battle and a battle for the ages. “

The statistics in the fourth set were almost unbelievable. Washington dodged 12 match points while the WSU survived nine set points before the murder of Emoni Bush ended the set. The teams combined for 51 kills and 83 digs. UW’s Ella May Powell had 13 assists and 13 digs in the set.

After a slow start, WSU regrouped in the fifth set for their fourth straight victory over the Huskies. The Cougars erased a 5-2 deficit with the Pia Timmer kill, two aces and a serve that led to a UW pass and a kill by center blocker Magda Jehlarova.

â€œI have no words, it’s so cool,â€ Timmer said in a post-game interview on Pac-12 Network. â€œThere were so many people here. I’m really proud of my team and what we’ve done.

â€œIt was really frustrating on points because we missed six serves in the critical time (in the fourth set). It was a roller coaster ride, but we came back (to the fifth). It just comes from every player cheering themselves on and telling themselves to stay positive all the time. “

He followed the Cougars’ model of resilience throughout the young season. WSU, which opened the season with a No.18 ranking, the highest in the program, quickly gave up its first four games against current No.2 Pittsburgh, No.4 Purdue, UNLV and South Carolina. These latter two programs were in the category of votes received just outside of the top 25 in last week’s AVCA poll.

The Cougars responded with eight straight wins, including a pair of wins over nationally ranked Pac-12 opponents to open the conference game. They share first place with No.11 in Oregon, No.15 in UCLA and unranked Arizona.

â€œWith some people who are transferring, with a few injuries, this team has really stuck together, really tried to work hard and they have courage,â€ said Greeny.

WSU, which hosts USC on Friday and UCLA on Sunday, is almost back in the top 25 after its 2-0 week. The Cougars are the first team in the category of votes received. Washington, one of four Pac-12 teams at 0-2, dropped to 13th place.

Timmer tied the school record with 31 kills in the rally era (since 2001). She was named Pac-12 offensive player of the week. Jehlarova took defensive honors after tying her career high with 10 blocks against Washington. The two teamed up for a pair of blocks as WSU closed out the fifth set.

Junior passer Hannah Pukis rolled her left ankle after inadvertently stepping on a teammate’s foot early in the fourth set. Coaches checked her on for a few minutes, but she stayed on the pitch, adjusted her ankle brace, and finished with 53 assists to place 10th on WSU’s career roster. Katy Ryan, a 6-foot-5 rookie from Lakeland High in Rathdrum, Idaho, contributed 14 kills, a season-high.

Greeny praised the fan support within Bohler Gym for making a difference in the outcome.

â€œA great crowd, it was a really fun atmosphere,â€ said Greeny, who received congratulatory texts from program alumni, former Cougar teammates and school president Kirk Schulz. â€œIt’s a huge advantage, not just because we’re the only ones (in the Pac-12) playing in a smaller arena. Everyone is playing in a basketball arena and there can be a good crowd, but it might not be as loud (as Bohler) and the fans might not be above you.